When I was in Japan at the beginning of the year I was amazed too discover that Japan was in love with Kit Kats. One of my favourite chocolate bars from when I was in England was readily available and not only that but there were an unlimited amount of flavours! Japan had taken the simple chocolate wafer fingers of goodness and injected some crazy inventive genius to create an endless amount of taste combinations.

I was obsessed with the new flavours and were far too many to choose from, each shop I went too had new choices, I was seeing everything from normal sounding strawberry cheesecake, mocha tea to the more ‘out there’ sounding wasabi and sweet potato flavours. I ventured to try as many as I can and even the unusual flavours worked, my favourite being the wasabi white chocolate ones. If it hadn’t been for the risk of diabetes and getting fat I would have worked my way through the whole range.

I recently discovered in my cupboard my last remaining miniature wasabi Kit Kat and it got me thinking about how this all came to be and what other delicious or unusual tastes there were available. 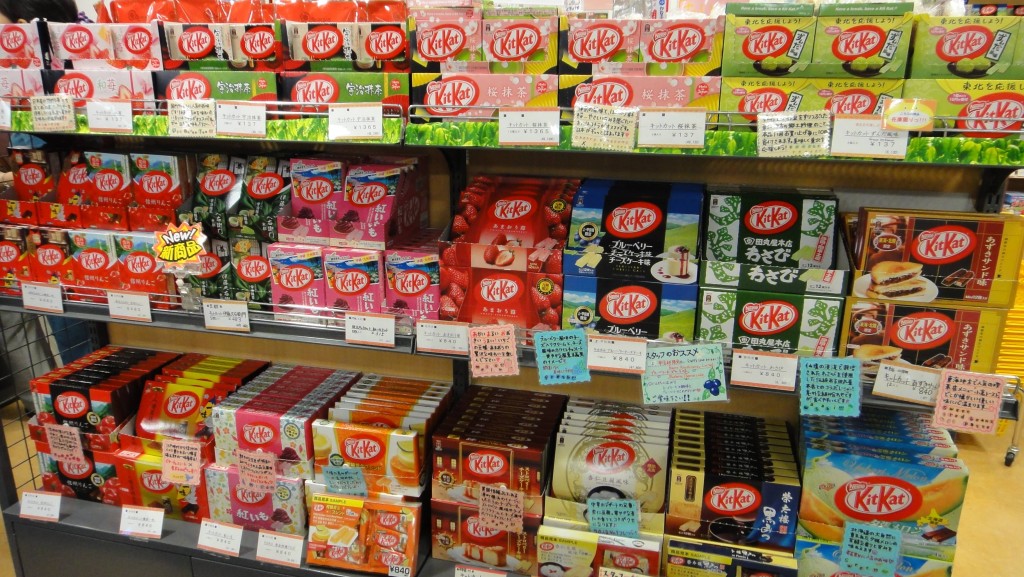 After some research I found that there have been over 300 variety of Kit Kat in Japan, some regional and some seasonal since the year 2000. Nestle, who created Kit Kat, created a business model where small limited runs of flavours would create more buzz and a rarity value amongst customers. Another big factor into its popularity is the unplanned, coincidental similarity with the Japanese phrase ‘Kitto Katsu’, which means ‘You will surely win’, this became a good luck charm for students taking exams and packets of bars were given as gifts to them during exam times. Kit Kat is seen as a high end product in Japan and approx. $NZ 200million is spent on the chocolate treats each year.

In 2014 Boutique Kit Kat stores opened and expanded to 7 branches by last year, here recipes designed by chef Yasumasa Takagi  were sold, with flavours such as raspberry infused dark chocolate, plum and passion fruit and chilli, the more popular varietys from these stores have been released to as seasonal products.

Some of the most popular varieties include – Purple sweet potato, matcha, soy sauce and adzuki(red bean paste).

This year they have introduced Sake flavour which I dying to try!!!