Yoshifumi Suzuki is managing director of Finedays International NZ, a company that organizes educational tours for Japanese students who would like to study in New Zealand.

After graduating from a Japanese university in Tokyo, Yoshifumi worked for JTB, a major Japanese travel agent. He had spent a year in New Zealand on working holiday while at university and always meant to come back. After getting married and having his first daughter he had a strong desire to bring up his children in New Zealand and his wife agreed.

After working for JTB New Zealand and then for a company specialized in educational tours to learn about the industry, he set up Finedays Internatioanl NZ.

The company currently deals with groups of intermediate and high school students from mostly private schools in Japan, sometimes organized by local governments. The company works as a coordinator between Japan and New Zealand schools, host families and local coordinators.

Yoshifumi finds it important to balance the expectation of Japanese students and the reality of New Zealand, such as the ethnic diversity of host families. The work needs a lot of preparation and communication with related people. Yoshifumi says, ‘anyone can start this business with no capital but it is hard to continue without human capital.’

Yoshifumi’s goal is not to expand the business but to better the quality of its service with higher satisfaction for both students and host schools and families. Yoshifumi would like to increase the number of Japanese fans of New Zealand by students returning home with good memories. In the future, the company plans to take care of individual students who would like to come back and study long term.

His first daughter who moved to New Zealand when she was six months old is now 14, and his second daughter who was born here is now 7 years old. Yoshifumi appreciates the way they are growing up here, saying “They are free and relaxed.” The bonus, he believes, is that they are very close to their father, as he can spend a lot of time with his family. They often visit free events together. “This country is family-oriented, and that’s exactly what I wanted.” 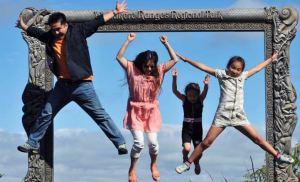