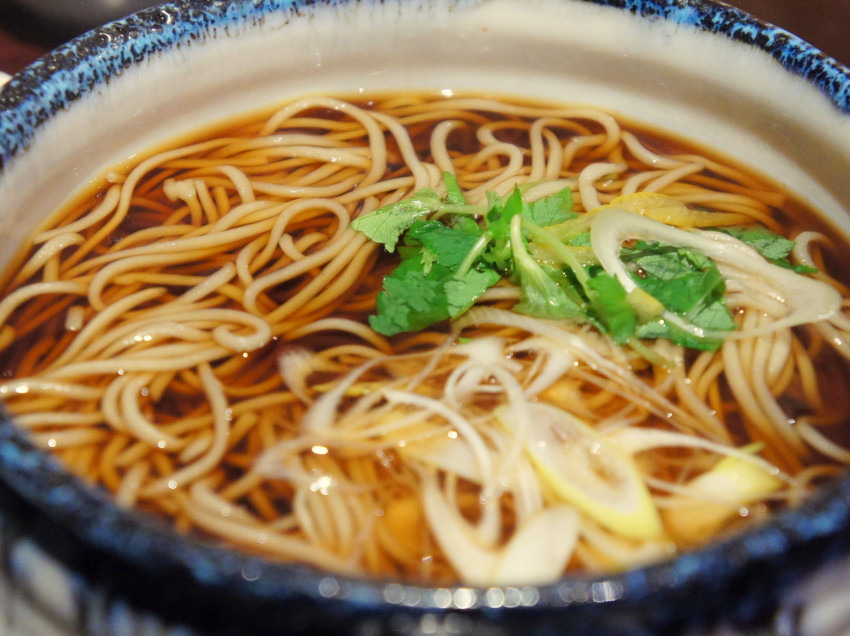 Soba is one of the most popular traditional Japanese noodles, among others such as udon.
In particular it is eaten on New Year’s Eve (Omisoka). The dish is called ‘toshikoshi’ soba. It literally means passing of the old year noodles.
Eaten to commemorate the passing of the new year, in a delicious fashion.
Why soba? you may ask. The real answer is nobody really knows. It is believed that as the noodles themselves are long and slender; it is symbolic to maybe to live long and slenderly. Moreover the idea of long and thin noodles is akin to the Confucian idea of living a long and peaceful life. Soba is easier to eat and breaks apart with less stress than its flour counterpart, udon. This could signify an easy end to the hardships of the last year.
The ‘toshikoshi’ soba is supposably meant to be eaten before the new year to avoid bad luck. You may be lucky enough to get seconds after which.
The soba is eaten in a ‘dashi’ broth garnished with spring onion, a shiitake mushroom, potentially some vegetables like spinach, with ‘kamaboko’ fish (tube shaped fish pate that is cut into semi circles). The noodles are eaten with in a dash broth , topped with ‘kamaboko’ which is steamed fish cakes, blanched spinach, and chopped spring onions. Sometimes a shiitake mushroom or ‘nori’ sprinkled on top.
The soup itself is very soothing, and a good bowl can be judged by the ability to taste each of the ingredients flavors in particularly the Soba. Cooking the soba itself is a technique in of its self. The longer the noodles sits in the soup, the more the noodle softens and breaks. Its normal for each guest to be served separately. No waiting for all to be served is required, otherwise the dish would be ruined. Toshikoshi Soba is a truly fabulous and mouth watering way to bring in the new year.