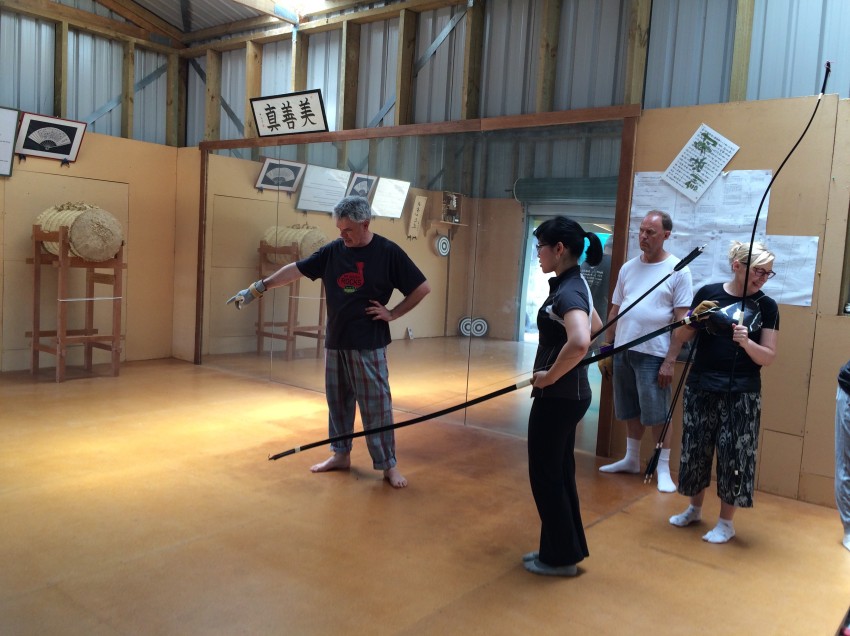 Chris was one of the adult students I taught Japanese some years ago, and I knew he was very interested in things Japanese. In one of the lessons he showed us his collection of Tsuba, the guard of sword. 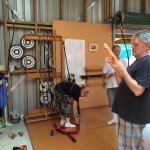 Kyudo is a traditional Japanese art of archery, which is very popular and boasts a large following in Japan. Chris teaches Kyudo to local kiwis in a gym in Panmure. There are about 16 students. 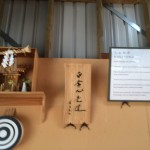 Pa. When I visited, he had some students and told me that as it was a casual affair they didn’t wear formal Japanese training wear. As I watched them, they prepared the bows and arrows with the help from another instructor Kumi, and then kneeled and prayed in front of the small shrine in the hall. Then they started to make ritual movements before they started shooting. 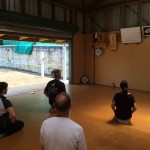 I asked one of the students, Prae, if she liked the formality of the practice. She liked its structure and enjoyed the Zen meditation side of the martial art. Other students, Eva and Craig, also liked Kyudo in that it is not just about ‘shooting and hitting the target’. They also enjoy social aspects of the practice. “We meet a lot of nice, friendly people.” After the practice we enjoyed chatting, snacking on berries and drinking tea.

Though Kyudo has a long history in Europe such as the UK and France,

it is fairly new in New Zealand. It was in 2010 that NZ federation of Kyudo was formed and became a full member of the International Kyudo Federation in 2014. Australia is now an IKYF affiliated country and should become a full member in the future. Chris and Prae went to Brisbane last week to attend the official opening of a practice hall. 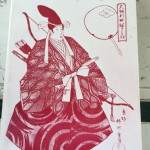 Chris as a teenager in the UK was interested in Japan, and was fascinated by the book, Zen in the Art of Archery, by Eugen Herrigel. After moving to New Zealand in 1990, Chris started to contact people about Kyudo. He also practices Iaido, a traditional martial art using swords. He showed us some swords, one of which would slice you. He also has collections of Ukiyoe, wood block prints, and wooden chests and cupboards, which he buys by auction and online.

I asked him to show us his Tsuba collection again. They are old, one of 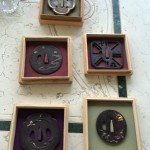 them dating back from Muromachi Period (1336-1573), but the designs look ultra-modern. When I mentioned that to Chris, he said, “Things Japanese always look modern.”