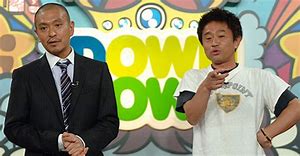 Masatoshi Hamada and Hitoshi Masumoto make up probably the most famous and prolific comedy duo in Japan, together they are known as Downtown.

They are most famous for their manzai acts as well as hosting a number of variety shows and television specials.

Many of you won’t be familiar with the term manzai, it is a Japanese style of stand-up comedy that is very popular. It consists of two performers, a tsukkomi (Hamada), or straight man and a boke (Masumoto), the funny guy. The two performers play off of each other and deliver fast paced jokes and puns. The tsukkomi often butts in and corrects the boke and it’s common for the boke to receive a smack round the head, Hamada is well known for this. 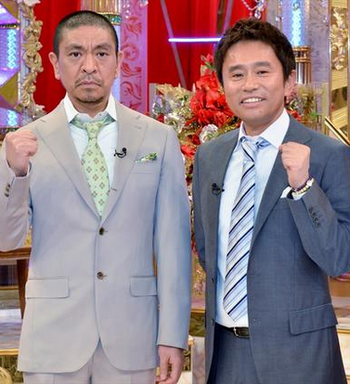 Downtown are the most respected and admired manzai acts among their younger piers and other comedy acts.

They met at school growing up in Amagasaki, Hyogo where they both joined the schools broadcasting club and often joked about becoming a comedy duo. Once they went to high school they went to different schools but remained in touch.

After graduating Matsumoto convinced Hamada to join him as a comedian and in 1983 they made their major debut as Downtown (a name chosen from a magazine).

Their early years were tough, sometimes, not even being able to give free tickets away but despite the hardships, they gradually increased their fan-base and status and in April 1987 (four years after their debut) they began hosting a local television show called Yoji Desu Yōda (“It’s Four O’Clock”) which immediately raised them to idol-like popularity in the region, and since then they never looked back.

There next step was to move to Tokyo and after a few low ranking TV shows they hit their big break again with variety show ‘Downtown no Gaki no Tsukai ya Arahende!!’

It is notable that Downtown never had a mentor (it was common for younger comedians to be “trained” by older, more experienced comedians). It is thought that this was what made Downtown so unorthodox and popular as their style was different from the mainstream.

Another important aspect of Downtown’s comedy is their willingness to make themselves the butt of the joke. While many popular manzai comedians become elevated to the level where poking fun at them is out of the question, Downtown has always taken ridiculous roles in shows, even after becoming popular. 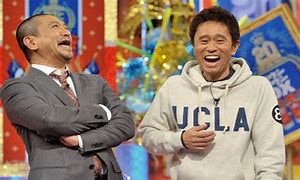 This is particularly evident in the show ‘Gaki No Tsukai’ where they endure countless physical and mental punishments, such as their punishment games. Generally, these roles are reserved for younger, less popular comedians, but Matsumoto and Hamada relish these roles even after becoming part of the elite of Japanese entertainment.

Downtown has not performed Manzai since 1991 but the duo are still together and are regarded as the greatest of the genre.

Despite their talent and performances together they are actually not that close in their personal lives and they don’t even have each other’s phone numbers, they travel to studios separately and never visit each other’s houses. This does not mean, however, they do not get along outside of work. Though they do not consider each other to be friends, their deep business relationship and respect for each other is evident.

There are lots and lots of YouTube videos of the pair with subtitles so you should really check them out if you are into Japanese gameshows and comedy. I especially like the show ‘Gaki No Tsuaki’ where they are joined by other fellow comedians. There is a link below and this will lead to many other videos.

Also if you want to learn more there is a really good Netflix drama based on a Manga called Hibana: Spark which follows the ups and downs of a young up and coming Manzai act and is similar to the Downtown story.