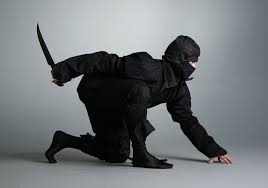 Miso-Katsu is my favourite Japanese dish! I eat it pretty much every time I go out to eat at a Japanese restaurant. I can’t get enough of it and will never get bored of it! Yum, Yum, Yum!

It is basically a type of tonkatsu. Crispy fried Pork Cutlet with a thick miso based sauce. Miso sauce is a tangy and sweet sauce made into a thick sauce by adding broth and seasonings. The sauce is based on Hatcho miso which is made from pure soy bean and fermented for a minimum of 2 years. This dish is famous in Nagoya. My mouth is watering as I write this, it’s making me hungry!

The dish can be served in as a miso-katsu don rice bowl or as part of a larger meal.

If you want to try you can try find a recipe below or visit your local Japanese eatery! You will not regret it!

A Ninja or Shinobi was a covert agent or mercenary in feudal Japan. Despite many popular folktales, historical accounts of the ninja are scarce.

The functions of the ninja included: espionage, sabotage, infiltration, assassination and guerrilla warfare. Their covert methods of waging irregular warfare were deemed dishonourable and beneath the samurai-caste, who observed strict rules about honour and combat. The shinobi proper, a specially trained group of spies and mercenaries, appeared in the Sengoku or “warring states” period, in the 15th century, but antecedents may have existed earlier.

Superhuman powers were often associated with the ninja. Some legends include flight, invisibility, shapeshifting, the ability to “split” into multiple bodies, the summoning of animals, and control over the five classical elements. Ninja used all variety of weapons from Katana to Shuriken or ninja stars and poisons and explosive. All everyday items could be used by the ninja for combat.

The ninjas have been the subject of many video games and movies and are very popular in the western culture and I’m a big fan! 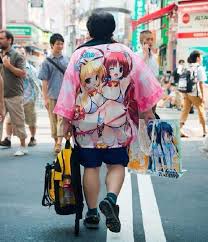 In modern Japanese slang, the term otaku is equivalent to “geek” or “nerd”, but in a more derogatory manner than used in the West. It can relate to any fan of any particular theme, topic, hobby or form of entertainment. When these people are referred to as otaku, they are judged for their behaviours. People see an “otaku” as a person unable to relate to reality who lives for their hobby.

Otaku to me are fun loving people who are defiantly huge ‘geeks’ but geeks are fun and I feel everyone has an inner geek. The term covers many sub cultures, mainly Manga/Anime fans but it also covers fans of video games or toys.

The district of Akihabara in Tokyo is the epicentre of Otaku and many are found here. People dress up and visit the many stores that feature manga and figurines/toys and card games.