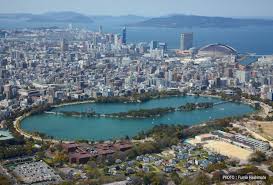 This weekend in the Auckland CBD the New Zealand-Japan Society of Auckland and the consulate-General of Japan in Auckland host a free event in celebration of the 30th anniversary of the two cities sister relationship. Not many of you including myself know too much about this Japanese city so here is a quick look at Fukuoka and what the highlights of this place are. The event looks fun so come along and enjoy the celebration.

Fukuoka City is situated on the northern shore of the Japanese islands of Kyushu and it is the most populated city on the southern island. As of last year Fukuoka is Japans fifth largest city, bigger than Kyoto and Kobe. The city is bordered on three sides by mountains and opens, on the northern side to the Sea of Genkai, it is approximately 1,100 km from Tokyo. The city has a humid subtropical climate and humid summers and mild winters.

The local foods include mentaiko, Hakata Ramen and motsunabe. Street stalls sell yummy ramen in the evenings and tourists and locals love to come and eat here.

As a city they host and enjoy more than 2 million foreign holidaymakers and visitors a year, mainly from neighbouring China and South Korea, and the city has a lot of cruise ships coming into port after its development of its port area and terminals.

The city also holds sister city status with, Atlanta and Oakland in the USA, Bordeaux in France, Busan in S.Korea, Guangzhou in China and Ipoh in Malaysia.

The city boasts many attractions, museums and festivals, the highlights being Kyushu national museum, Fukuoka Castle and Marine Park Uminonakamichi, an amusement park that has a petting zoo, aquarium, beaches and rides.

Yamakasa, held for two weeks each July, is Fukuoka’s oldest festival with a history of over 700 years. The festival dates back to 1241 when a priest called Shioichu Kokushi saved Hakata from a terrible plague by being carried around the city on a movable shrine and throwing water. Teams of men (no women, except small girls, are allowed), representing different districts in the city, commemorate the priest’s route by racing against the clock around a set course carrying on their shoulders floats weighing several thousand pounds. Participants all wear shimekomi which are traditional loincloths.

So there is just a brief overview of the city so if you would like to know more check out the celebration tomorrow in Auckland City and enjoy the festivities or if you visit Japan go there yourself.