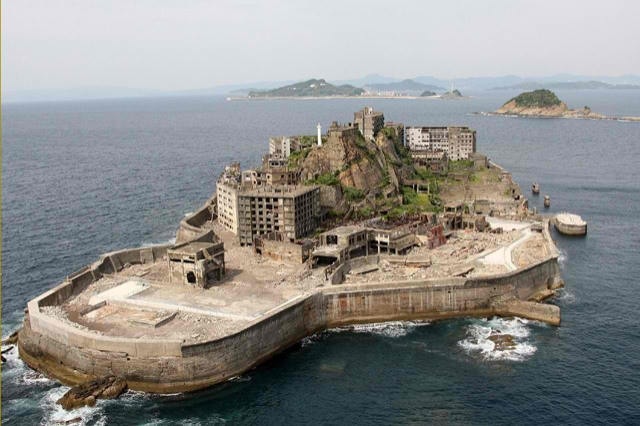 Hashima Island or Gunkanjima (Battleship Island) as it is also known, is an eerie abandoned island which lies about 15Km from Japan’s southern city of Nagasaki.

The 16 acre island was originally known for its undersea coal mines, established in 1887 and it peaked to a population of 5,259 workers in 1959 making it the most densely populated place in the world at the time. Whilst the island is a symbol of the rapid industrialization of Japan it is also a reminder of its dark history as a site of forced labour during WW2.

In 1916 the coal company on the island built Japan’s first reinforced concrete building, a 7 story apartment block for the miners. During the years that followed multiple other buildings were constructed such as a school, hospital, community centre and town hall and even for entertainment purposes there was a cinema, swimming pools, shops and even a pachinko parlour. 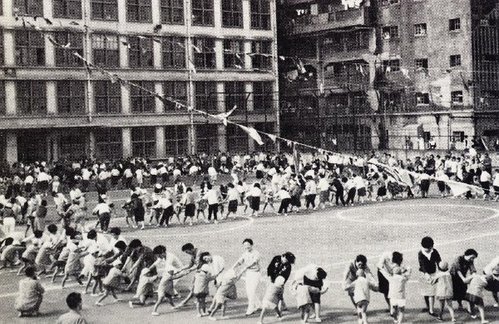 In the 1960’s as petroleum replaced coal in Japan many of the mines including Hashima began to shut and Mitsubishi (who owned the site) officially closed the mine in January 1974 and the island was cleared of all its inhabitants by April of that year. 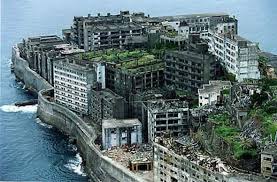 Interest in the island re-emerged in the 2000s on account of its undisturbed historic ruins, and it gradually became a tourist attraction of a sort. Certain collapsed exterior walls have since been restored, and travel to Hashima was re-opened to tourists on April 22, 2009. Increasing interest in the island resulted in an initiative for its protection as a site of industrial heritage.

The island was formally approved as a UNESCO World Heritage site in July 2015, as part of Japan’s Sites of Japan’s Meiji Industrial Revolution: Iron and Steel, Shipbuilding and Coal Mining.

The island has featured in a number of feature films from which you may recognise, most notably it was the villains lair in James Bond 007’s Skyfall, Hashima provided the inspiration and the aerial shots. Parts of the movie adaptation of the manga Attack on Titan was also filmed on the island.

If you want to visit Hashima and check it out for yourself you must join one of the organised tours that run several times a day, with boats taking about 30 minutes to get to the island from Nagasaki.

Stepping off the ferry, you are faced with giant twisted girders, crumbling brick structures, and shrubbery reclaiming the buildings in which an entire community once lived and worked.

The guided tour takes visitors along a set route on elevated walkways, which pass near a number of the best sites. This may sound disappointing to the more adventurous explorers out there, but the restrictions are intended to protect both the tourists (from collapsing buildings) and the ruins themselves. There are plenty of great photo opportunities throughout, and the tour guides give interesting insights into the lifestyle and conditions on the island for its former residents.

Despite the island’s new status and recognition, it remains a place in peril, with recent storms causing additional structural damage to already unstable buildings. It’s possible that future storms may cause further destruction, and may affect the visitation and parts of the island accessible to tourists.

You can visit the website http://www.hashima-island.co.uk/# and take a google street view tour of this amazing forgotten world and check it out for yourself.