Before I went to Japan one of the top things on my to-do was go to Fuji-Q Highland and in particularly the Super Scary Labyrinth of Fear….. Or as it’s also known….the Haunted Hospital attraction!

Approximately 1Km long and almost an hour of nerves and fear in a realistic abandoned hospital overrun with ghosts and ghouls and the undead…..bring it on!!!

We queued up for the best part of 3 hours and from the outside it looked very intimidating, the long wait time added to the anticipation but it was defiantly worth the wait. While in line you can see the exit of the attraction and every 10 or so minute’s groups of people come running out screaming in fear falling over one another, seeing this defiantly got the adrenaline pumping.

So finally we get near the front of the line and a lady in bloody hospital scrubs ushers around 20-30 people into what looks like the main lobby of the hospital and we take a seat to watch an introduction video, which was pretty hard-core.

Then we were let one group at a time, mine being just me and my very nervous partner, in intervals (to keep the groups apart) into a x-ray room where they take a photo…..a very scared looking photo may I add as they put a bit of a shock in there just as the flash goes off.

Then we get moved on by a nurse out of the room to a staircase and handed a very weak torch, which helped to see in the badly lit rooms but made it scarier as it didn’t light up enough to see well enough! And up the stairs we climbed……

I had a dead arm already from my partners grip and we started to make our way through the maze of corridors and rooms. The way it is done is amazing I actually felt like I was in an old abandoned hospital, there were old wheelchairs, jars of body parts, operating tables and patient beds all bloody and scattered everywhere. 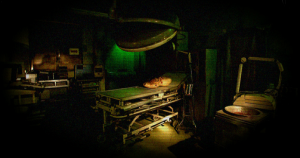 After a couple of carefully crept through rooms nothing had happened but the anticipation was a killer, we were expecting stuff to happen the whole time, people we saw on beds ended up being just dummies and sounds and rattling were just decoys. We were moving slow shining the torch in every corner, no one there where we were expecting a fright. Then it happened some scary as looking patient ran at us from behind causing us to scream and run!

This went on and on and on, working our way through between the scares and almost scares and zombie patients and ghostly doctors jumping out when you least expect!. Every now and then there are coward doors where you can leave if you have had enough and I asked my partner if she wanted to go but hats off to her she stuck it out like a hero!

The rooms resembled everything from quarantine wards to CT scan rooms and long corridors with doors either side.

I won’t go into too much detail because it’s better to experience yourself without full knowledge of what lies ahead… if you dare! All I will say is it is defiantly a must do…..and we survived the Haunted Hospital

Just to add we strolled out the exit with smiles on our faces because we didn’t want to run out screaming ha-ha!