Fumikazu ‘Bun’ Sato is a physiotherapist for BodyZone Physiotherapy in Glenfield.

As a child born in Gifu Prefecture, he massaged his mother regularly and enjoyed it. He took a course in reflexology. He got a Thai massage qualification. But there were some twists until he became a physiotherapist.

Bun completed Environmental Studies at a university in Kyoto, but Japan was 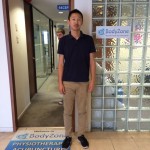 in the midst of ‘Employment Ice Age’. While at uni he became hooked on snowboarding. He worked as an instructor in Niigata prefecture. He wanted to do snowboarding overseas and came to Queenstown, where he met his wife who worked at Coronet Peak. He came back to Queenstown under working holiday visa. Both Bun and his wife wanted to live in New Zealand. He worked as a manager in a restaurant for three years to gain permanent residency, and he worked as a snowboarding instructor for five seasons in Coronet Peak. All this while he annually visited Thailand and was qualified for Thai massage.

Bun had always been interested in massage for ‘healing’, making patients feel better, but now he was more interested in ‘curing’, getting down to the bottom of health issues. He decided to enroll in Physiotherapy at AUT (Auckland University of Technology). After having their first child, they moved to Auckland. The course was highly competitive, accepting only one out of ten applicants. He studied the standard course for Health Science Degree and with good grades was accepted half a year later. Typically half of the students drop out before completing the four year course, but with the support of his wife he persevered. 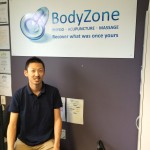 Bun has always enjoyed interacting with people, and he loves analyzing and identifying the cause of pain together with his clients. When I mentioned my chiropractor saying, “Chiro for bones and Physio for muscles?”, he pointed out that it is a common misconception. “A physiotherapist should know about lungs, brain, nerves, spine, everything in the body.” He gives his clients, some of whom suffer from chronic shoulder and back pain, massage, rehabilitation, diagnosis and treatment under ACC. BodyZone Physiotherapy has other healthcare professionals including podiatrist and acupuncturist, and he is currently interested in ‘Dry Needling.’ For Bun it is never ending learning.

Bun will be more than happy to help their six- and three-year old daughters learn snowboarding if they show interest.  His clients include athletes from Rugby league teams. He says it will be nice to get involved in the Rugby World Cup held in Japan in 2019. 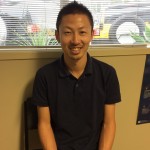