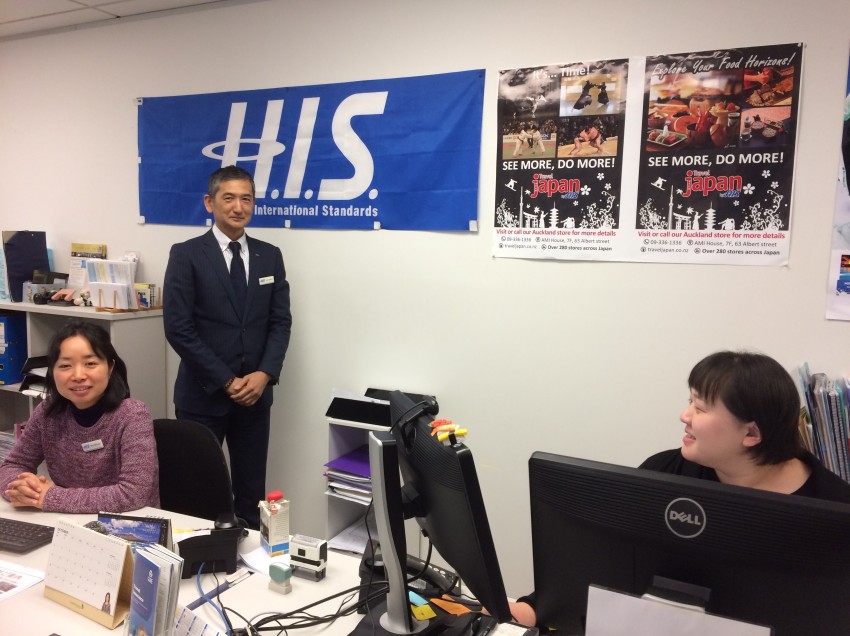 H.I.S. New Zealand is a Japanese travel agency based in Auckland. I talked to Naoto Ikeshita, General Manager.

H.I.S. is one of the major travel agents in Japan which boasts 299 domestic and 228 overseas offices. Its strength is in inbound and outbound tours.  Naoto entered the company in 1993 and worked mainly in the sales departments including the domestic headquarters in Tokyo and the office in Germany. He has always wanted to challenge overseas and was appointed to New Zealand in 2012 because it is a ‘difficult’ market.

“When it comes to inbound, which means tourists from Japan, New Zealand is regarded as one of the ‘final’ destinations. Tourists who covered other parts of the world such as Europe and America decide to come here. As for the market for outbound, kiwis travelling to Japan, the population is small and many people still believe it is costly.” On top of that New Zealand has a stronghold of three major travel agents.  So what are his strategies?

Tourists from Japan used to be limited to certain demographic, namely seniors with plenty of time and money to spend. Naoto aims to expand the target and appeal to the young in their twenties and thirties. He has seen a large number of youth from other countries enjoying nature and activities, and he wants to offer a wider range of activities and destinations off the beaten track. Naoto is passionate about cycling, and having left his family back in Japan he has enjoyed camping by himself. He is currently a voluntary guide for cycling tours. He will soon introduce night tours tasting craft beer, again himself as a guide.

JNTO, Japan National Tourism Organization does not have an office in New Zealand, and without its funding it is left to local companies to promote Japan. 2019 Rugby World Cup and 2020 Tokyo Olympic Games are the major sports events, but he knows from his past experience that one-off events won’t sustain consistent number of tourists. He continues to offer information on Japan and unique products by H.I.S. through events, flyers and digital media.  He feels media has started to report on other areas than the ‘golden route’ of Tokyo, Mt. Fuji and Kyoto.

The catch is the airfare, and he tells me the secret: off-peak, May and June are great times to visit Tohoku, northern area, and Hokkaido. Another secret is HAnavi, a tie-up with All Nippon Airways, that offers products cheaper than online booking sites.

Naoto believes Japan is the best country for tourism. It has history, culture, great foods, activities including shopping and skiing. Big cities and countryside are very close. And its best asset is its people.  “We have nice people in Japan.”