Pukekohe is a vibrant country town, the southernmost suburb of Auckland. It has been rapidly developed as a residential hub together with all the shops and major franchise plus large‐scale retirement villages. Mr. Ochiai has been running a Japanese restaurant and catering business here.

Mr. Ochiai gained postgraduate degree in Architecture and worked for architectural design companies in Japan. While designing interior and exterior of restaurants and hotels, he started to get interested and involved in total production of the hospitality industry, including menus, plates and cutlery, concepts, designs, gardens. Chefs and owners shared their recipes and other knowledge with him, and he became a producer in the food industry. A company wanted to start a franchise and asked him to produce a franchise restaurant Big Boy, which was a big success.

He was not happy with the educational system in Japan and wanted his two sons to enjoy what they loved – Rugby. Rugby was also his own passion, and they traveled far and wide including New Zealand, Australia, South America and Europe to see matches. When he asked his boys so they wanted to move to, they said “New Zealand!” He had enjoyed visiting NZ regularly, playing rugby and kayaking, and he appreciated its nature with four seasons and the happy and relaxed atmosphere. 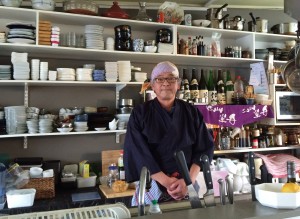 In 2000 they moved under visitors’ visa and he worked as an architect until he gained permanent residency in 2006. After searching for a suitable area to live from Kerikeri in the north down to Dunedin in the south, he settled in North Shore to commute to CBD, but jumped at the offer of a house from a friend in Pukekohe for its rural charm.

After running a small boutique Japanese inn RYOKAN TAKUMU in Bayswater, he set up the Japanese Kitchen SAKURA in 2011, thinking this was the right time to move on to what he wanted to do now that his boys had grown up. Seeing Japanese restaurants here serving ‘Sushi’ and other common dishes, he wanted to serve ‘authentic’ dishes. The restaurant is by booking only, and he considers the seasonal, varied dishes. He does not spend money for advertising and most of the cost goes to materials, because he believes his guests impressed with his ‘entertainment business’ will bring new guests . 80% of his guests are repeaters. When catering in the restaurant or in other venues of the customers’ choice, the staff not only serve meals but also help the party by taking photos, opening bottles of champagne and putting up banners with the name of the person for the occasion. “The staff are casts, the kitchen is the stage.”

He loves this community and enjoys interacting with people, introducing them to Japanese culture. He hosted some charity events for Christchurch and Japan after the earthquakes, inviting musicians and martial arts members active in Auckland. “I don’t feel any stress. I don’t think of retiring at all. This is my

passion and my hobby.” His next project is a new Japanese inn with Onsen (hot spring spa) and is searching for a right location in this area. He has been using the Bayswater inn to train young people from Japan, and together with them and with the next generation, he wants to create a private, relaxing place which offers both meals and the spa, showcasing the ultimate Japanese hospitality, ‘o‐ motenashi’. He welcomes anyone who are interested in this project and are willing to work with him. If you are, please contact Japanese Kitchen SAKURA at JapaneseKitchenSAKURA@mail.com.