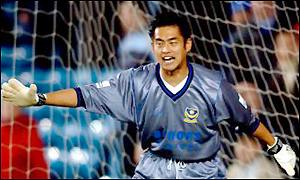 The 179cm (5’10”) Japanese International goalkeeper arrived at the English division 1 side  Portsmouth FC on October 24th 2001 dubbed as the ‘Japanese David Beckham’ in a then club record NZ$3.6 Million deal from J-League side Yokohama F.Marinos.

He arrived to much fanfare and there was little doubt that he was a good goalkeeper with an impressive resume, being Japans number 1 in there very first World Cup outing in France ’98 and Finishing as runner up in the 2001 Confederations cup. As well as winning the Asian cup in 2000.

There was though the question as to if he had the pedigree or stature to succeed in the physical English game, especially being the smallest goalkeeper in the league.

The fact of the matter was the goalkeeper was bought as part of a money making scheme by then Portsmouth chairman Milan Mandaric. He believed the signing would open up the lucrative Far East commercial market. But just 22 months and 12 games later this opportunity was over as Kawaguchi left for Denmark, and a fresh start with Nordsjaelland.

The odds were against him from the beginning, he was at club where the manager didn’t choose to buy him, and the current goalkeeper had put him down to a local newspaper fearing his position was at risk creating a not very hospitable dressing room. Also being a non-native speaker he felt isolated as the club did not go out there way to help adjust with his new surroundings. He mainly lived a lonely and isolated life during his spell. 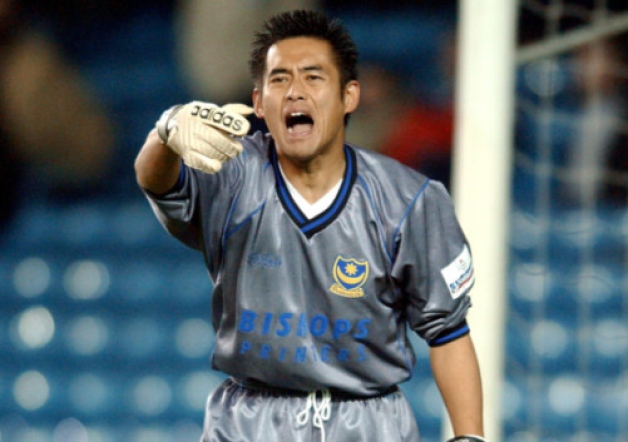 Yoshi played his first game for Portsmouth on 3rd November 2001, conceding a goal only 26 seconds into his debut in a 3-2 win, his second game ended in a draw but in his third game he produced a world class performance against a table topping Manchester City, leading 2-1 at half time the second half was basically Manchester City vs the new Portsmouth goalkeeper and he shone, producing save after save playing with a defence in front of him that did him no favours. Following this outstanding display though followed a string of not so impressive results

Just 64 days after his much anticipated debut a humiliating 4-1 home defeat to lowly Leyton Orient in the FA cup resulted in Kawaguchi losing his number 1 spot, reducing him to tears after the game. He conceded a total of 25 goals in just 11 starts. Even though these stats don’t look too impressive not all the blame can be put on the Japanese international, the back four defensive line was leakier than a holey bucket and left the keeper exposed time after time.

Despite all this the faithful Portsmouth fans saw him as a cult figure at the club and respected the fact he always had a smile on his face despite everything going against him and would not hear a bad word against him. His determination and effort earned him great respect from the supporters, who always like a tryer, they could see he had a proven track record and despite some terrible blunders knew that the whole situation had left him facing an uphill struggle from the start and the whole team that season had not had the best year – Kawaguchi’s replacement went on to concede 22 goals in just 7 games

After a whole season of playing reserve football Yoshi’s final appearance was on May 4, 2003, as a half-time substitute in the 5-0 win at Bradford City, the final game of Portsmouth’s championship winning season, He came on to a standing ovation from the fans who appreciated his effort and demeanour, never complaining and just working hard. Most heart-breaking of all, his absence from the Portsmouth team had cost him his No1 spot in the 2002 World Cup held in his homeland jointly hosted by South Korea and Japan.

After his Portsmouth nightmare ended he moved on to a brief spell in Denmark before returning home and playing over 200 games for Jubilo Iwata and he ply’s his trade in the J-League division 2 with FC Gifu aged 39.

Yoshi was not necessarily built for the English game but given a better opportunity to impress and had the club helped him to settle into the English lifestyle instead of just seeing $ signs I along with the majority of Portsmouth fans feel that with his positive, hard-working attitude the fan favourite and Japanese national hero would have gone on to play a lot more games for the club and made him a better overall player.