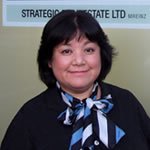 Yoshiko ISSHIKI is the managing director of One Colour International Ltd. (OCI) and a sales consultant at Harcourts New Lynn. (One Colour is her Japanese family name.)

She fell in love in New Zealand when she visited as a tour conductor in 1987, but it was not until 1996 that she moved here. The final push came when the Kobe Hanshin Great Earthquake hit when she was in Osaka in 1995. “I saw motorways and buildings totally collapsed. Life could end in an instant.”

She had always wanted to have her own business, and set up the consultancy company OCI to cater for Japanese people visiting New Zealand, supporting people who would like to stay short term, to study in NZ, to have a wedding and honeymoon here. “Internet was beginning to be common, so we could reach customers from Japan.” In 2004 she joined Harcourts, after she experienced buying a house of her own, and also as her Kiwi husband was in the industry.

As for Japanese customers, the exchange rate between Japanese yen and New Zealand dollars greatly influences their demand. “50 to 60 yen, they feel its value for money to buy properties. 70 to 80 yen, the demand goes down.  At 90, they would rather consider selling up their property and capitalize.”

Over the last 3 to 4 years the Tohoku Great Earthquake triggered an influx of Japanese customers, who do not intend to live here permanently but want to diversify their portfolio or to have their kids study in NZ.

Her customers are not only Japanese. She feels that 60 percent are Japanese and 40 percent other ethnicities. “Local kiwis feel Asians will sell their properties at a higher price, and some customers would like to have a Japanese agent thinking they are trustworthy, and not just pushing to sell for their own profit.” She does not end the relationship with her customers after selling or buying by taking care of other needs through her consultancy company, coordinating house repairs, finding jobs and helping with life in general.

What puzzled her at the beginning of her life in NZ was that people here don’t understand the Japanese philosophy of Kikubari, subtle consideration towards other people. “I ask the former owner of a house to leave tins of paint for touch up, but the new owner flatly refuses to use them and complains they are just waste to be thrown away. I make tea for a colleague and he just says he doesn’t want it, rather than accepting it out of appreciation. At a restaurant I gave a piece of meat to my husband but he does not think of giving his to me.”

For new Japanese immigrants, she advises not to be disappointed when these situations occur and just to use it as an opportunity to explain Japanese culture. She also thinks it is important to be assertive, to say Yes or No clearly, while retaining the Japanese mindset and Kikubari in particular, which she believes, is unique in the world.

Her future goal is to provide services for aging Japanese living here. She has seen a number of people decide to go back to Japan, because they are worried about aging here.  “I would like to deliver Japanese meals and to help them with shopping.”

She loves fine dining with her husband, including Italian and Spanish cuisine. She enjoys visiting wineries, and telling Japanese customers which wines are good. She also has a karaoke set at home. She used to play golf, but these days she is too busy.

She loves to live and work in New Zealand, a country where rich and famous people wear shorts and T-shirts. Kiwis are down to earth and pragmatic, not pretentious. “Kiwis are human.”