Sumo might seem like a bizarre sport at first glance, two huge guys wearing very little pushing each other around in a ring. Often with the fight being over in a matter of seconds after a long build up.

But once you understand the rules and the history behind Japan’s national sport you are sure to appreciate and respect these giant athletes and the sport a whole lot more.

Sumo is said to have its roots in a Shinto agricultural ritual dance. The most powerful men displayed their strength in front of the kami (gods or spirits) as a sign of respect and gratitude to bring in a good harvest.

Later sumo was used as a way to compare strength and determine which fighters were most powerful and adept in hand-to-hand combat.

It was not until the Edo period (1603 – 1868) that professional sumo wrestlers emerged from the ranks of amateurs and regular competitions began to take place. The best fighters began to gain celebrity status and sumo’s popularity quickly spread amongst the masses, and Sumo as we know it today was born. 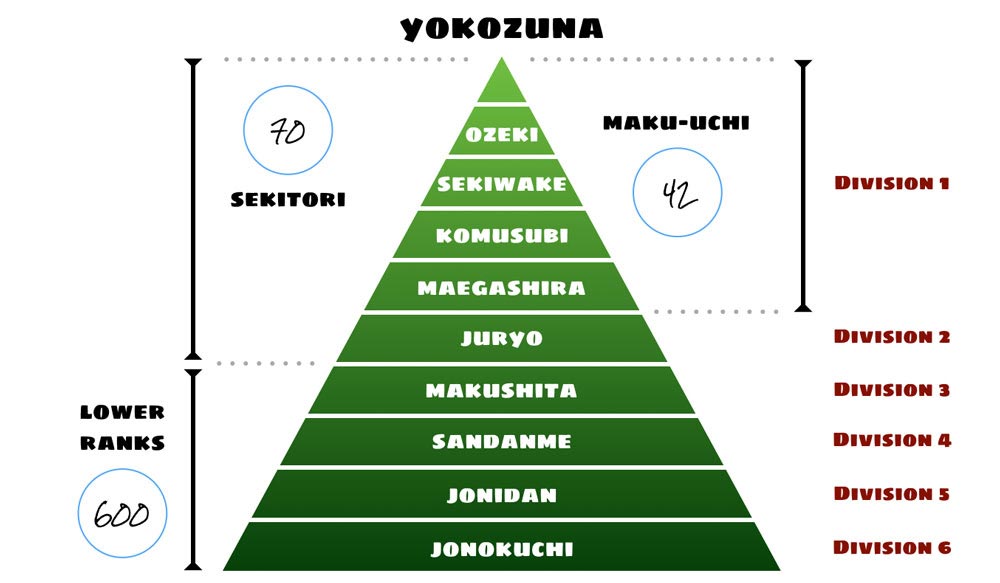 The sumo wrestlers are known as rikishi (the two characters of the kanji meaning “strength” and “warrior”). There are around 650 rikishi in the six divisions of sumo: Maku-uchi, Juryo, Makushita, Sandame, Jonidan and Jonokuchi

The Maku-uchi (the top division with the 42 best Rikishi) naturally receive the most media attention. At the top of this pile sits the Yokozuna, the grand champion. This position is typically achieved by winning two Hon-Basho (major tournaments that determine rankings) in a row.

There are six Hon-Basho per year, taking part every second month, and they last for 15 days. Rikishi from the top two divisions (known collectively as Sekitori) will wrestle every day of the major tournaments.

As of today, there have only been 72 Yokozuna in the history of the sport, which should give you an idea of the difficulty of achieving this rank. Yokozuna can never be demoted. They are the living embodiment of sumo, and when they are no longer able to uphold the standards of the rank, they are expected to retire.

Currently there are two Yokozuna after Kisenosato retired last year, these are Kakuryu and Hakuho.

Hakuho, who has dominated sumo for over a decade, is among the greatest champions of all time and holds most of the sport’s significant records.

Sumo wrestlers wear Mawashi which is essentially a thick 30-foot-long belt, that they tie in knots in the back to keep in place. They have an official thickness and strength requirement. During matches, the wrestler will grab onto the other wrestler’s Mawashi and use it to help them and make moves during a match.

Their hair is put in a topknot or Chonmage, and they use wax to get it to stay. Wax is applied daily by sumo hairdressers (Tokoyama). Once a wrestler joins a stable, they are required to grow out their hair in order to form a topknot.

Outside of tournaments and practices, in daily life, sumo wrestlers are required to wear traditional Japanese clothes. They must wear these traditional clothes all the time in public. 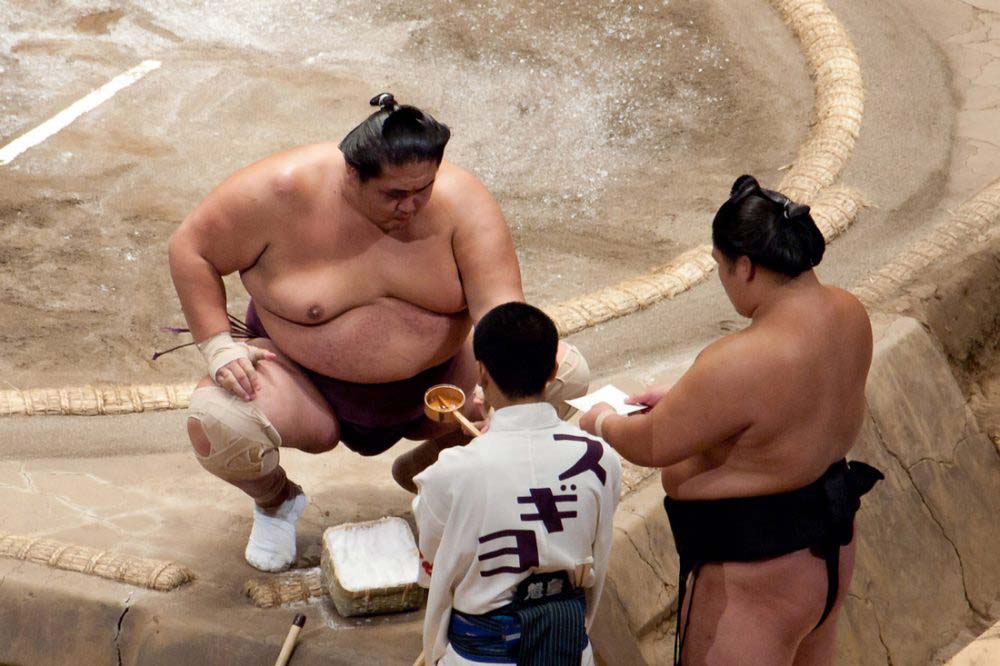 Sumo is unique in that the elaborate pre-match ceremony can be just as fascinating as the bout itself. The day before each major tournament the Dohyo, the 4.55 metre diameter clay platform housing the ring in which the bout takes place, is cleansed to pray for the safety of the Rikishi. This involves placing salt, cleansed rice, dried chestnut, dried kelp, dried cuttlefish, and nutmeg berry in a small hole made in the middle of the ring as offerings to the gods.

The Rikishi step onto the Dohyo from the east and west, the east side Rikishi entering first. They enter the ring and perform a ritual called Shiko, this is the leg raising and stomping that most of you are familiar with. This is more than just warming-up, the clapping of hands is to attract the attention of the gods, the raising of arms to the sky is to show they carry no weapons, and the famous legs raising and stomping is done to crush any lingering evil spirits.

With the Shiko finished the Rikishi leave the circle and cleanse themselves. The first ritual is called Chikara-mizu (“strength water”), each Rikishi received this water from the opponent they defeated last. Like the cleansing process at shrines and temples, each Rikishi will take a handful of water and swill it in their mouth. Next they take a handful of Kiyome-no-Shio (cleansing salt) and throw it over the ring before entering. 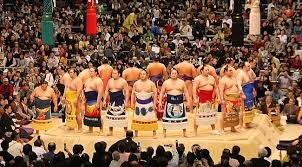 Once the judge (Shinpan) gives the signal for the bout to begin each Rikishi crouches behind a white line called the Shikirisen on their half of the ring. The fight begins when both fighters have clenched fists resting on or behind their line.

The moments before the fight can be incredibly tense. The Rikishi often crouch for a few seconds, cautiously waiting to see what their opponent does, before standing again to recompose themselves.

One bout decides the winner (this is not a best-of system) and as the first few seconds during which the Rikishi collide often decides the winner you can begin to appreciate why the pre-bout actions are often the most intense moments of the fight.

The initial crouch and charge are crucial. Upon positioning themselves opposite each other, the wrestlers perform a deep squat; without taking their feet off the ground, they then move forwards into a head-first crouched position, whilst also resting on one or two fists. This position is important because it allows them to adopt a more efficient posture to charge from and preloads their muscles. This enables them to spring up and charge their opponents more powerfully when the referee signals the bout to begin. A successful charge is usually a powerful charge and is often a key determining factor in who wins the bout.

Officially there are 82 techniques called Kimari-te (“deciding hand”) by which a Rikishi can win the match (e.g. push-out, neck throw, etc.).

The basic rule is that if any part of your body other than your feet touches the ground or you step outside the straw ring, the match is over and your opponent is declared the winner

Once a winner emerges both Rikishi stand at either side of the ring and bow to each other (neither should show emotion here), before the defeated Rikishi leaves the ring and the Shinpan officially declares the winner.  Each match is preceded by another elaborate ceremonial ritual.

No weight divisions are used in professional sumo, a wrestler can sometimes face an opponent double his own weight. However, with superior technique, smaller wrestlers can control and defeat much larger opponents. 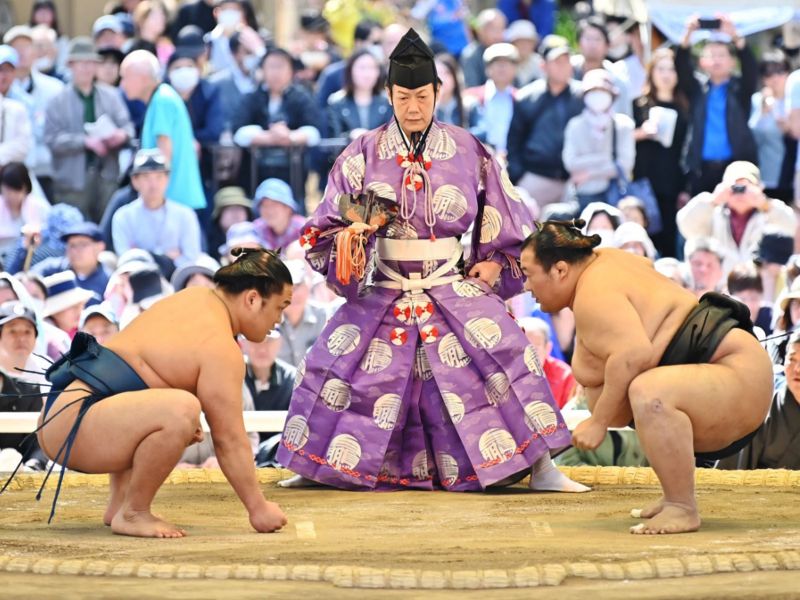 A sumo wrestler leads a highly regimented way of life. The Sumo Association prescribes the behaviour of its wrestlers in some detail. Breaking the rules can result in fines and/or suspension for both the offending wrestler and his stablemaster.

The type and quality of the dress depends on the wrestler’s rank.

Similar distinctions are made in stable life. The junior wrestlers must get up earliest, around 5 am, for training, whereas the higher ranked (Sekitori) may start around 7 am. When the others Sekitori are training, the junior wrestlers may have chores to do, such as assisting in cooking the lunch, cleaning, and preparing the bath. Juniors even will even hold a sekitori’s towel or wipe the sweat from him.

The ranking hierarchy is preserved for the order of precedence in bathing after training, and in eating lunch.

Wrestlers are not normally allowed to eat breakfast and are expected to have a siesta-like nap after a large lunch. The most common type of lunch served is the traditional sumo meal of chankonabe, which consists of a simmering stew of various fish, meat, and vegetables cooked at the table. It is usually eaten with rice and washed down with beer. This is intended to help wrestlers put on a lot of weight so as to compete more effectively. 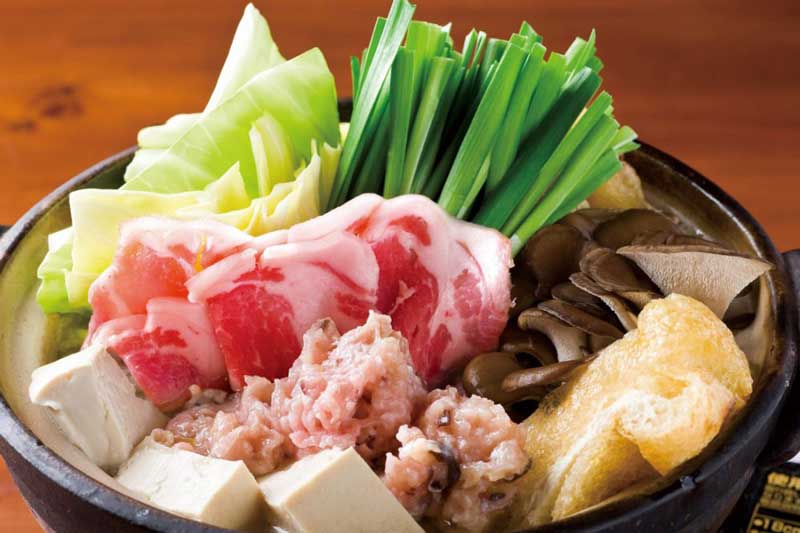 In the afternoon, the junior wrestlers again usually have cleaning or other chores, while their Sekitori counterparts may relax, or deal with work issues related to their fan clubs.

Younger wrestlers also attend classes, although their education differs from the typical curriculum of their non-sumo peers.

In the evening, Sekitori may go out with their sponsors, while the junior wrestlers generally stay at home in the stable, unless they are to accompany the Stable-master or a Sekitori as his Tsukebito (manservant) when he is out.

The junior wrestlers are given the most mundane while only the senior Tsukebito accompany the Sekitori when he goes out.

The Sekitori are given their own room in the stable, or may live in their own apartments, as do married wrestlers. The junior wrestlers sleep in communal dormitories. Thus, the world of the sumo wrestler is split broadly between the junior wrestlers, who serve, and the sekitori, who are served. Life is especially harsh for new recruits, to whom the worst jobs tend to be allocated, and the dropout rate at this stage is high.