Heikegani is a species of crab which is native to Japan whose shell resembles a human face. According to Japanese folklore these small crabs contain the souls of the fallen samurai warriors from the Battle of Dan-no-ura in 1185AD which took place in Japan’s inland sea, where the crabs are found. 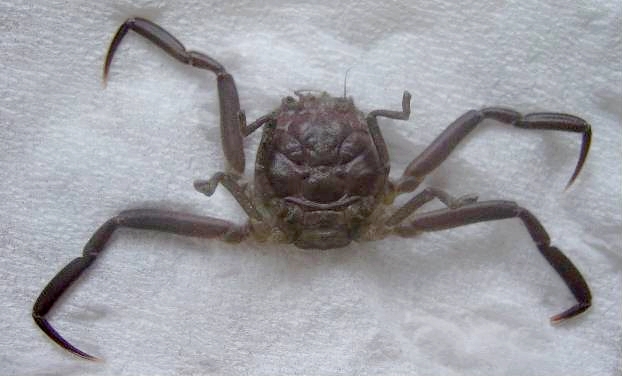 This crucial battle was a cultural and political turning point in Japanese history, Minamoto Yoritomo became the first Shogun, or military ruler, of Japan.  Dan-no-ura marked the beginning of seven centuries, in which Japan was ruled by warriors and Shoguns instead of Emperors and aristocrats.

The ruling Taira clan (Heike), was led by their child-Emperor, Antoku, and his grandmother, Tokiko Taira. The Heike had ruled Japan for many decades, but now, massively outnumbered, they were defeated at the hands of the Minamoto.

For the losing Heike samurai, surrendering to the enemy was never an option so those that were not slain in battle, committed suicide by drowning themselves along with their emperor. Their bodies became food for the heikegani crabs who lay in wait on the sea floor.

According to the Japanese legend, the souls of the Heike samurais were reincarnated into the Heikegani crabs who ate their remains, their angry faces now shown on the shells of the crabs. To this day, it is said that the Heikegani crabs roam the depths of the oceans around Japan, searching for the lost heirlooms of their empire.

The locals refuse to eat the crabs that are marked with faces (not all are), throwing them back into the sea.