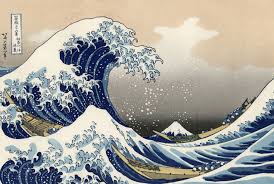 Published sometime between 1829 and 1833 was Katsushika Hokusai’s most famous work, the woodblock print, The Great Wave off Kanagawa. Which was the first print in his series Thirty-six Views of Mount Fuji. 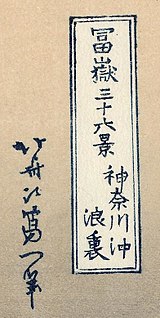 It is probably the most recognisable works of Japanese art in the world and original impressions of the print are in many western collections including the Metropolitan Museum of Art, the British Museum, the Art Institute of Chicago, the Los Angeles County Museum of Art, the National Gallery of Victoria in Melbourne and in Claude Monet’s home in France, among many other collections.

The image depicts an enormous wave threatening boats off the coast of the town of Kanagawa (the present-day city of Yokohama, Kanagawa Prefecture) with Mount Fuji sat in the centre, which could easily be mistaken as part of the water if you weren’t aware of the scenes location.

In the scene there are three oshiokuri-bune, fast boats that are used to transport live fish. There are eight rowers per boat, clinging to their oars. There are two more passengers in the front of each boat, bringing the total number of human figures in the image to thirty. Using the boats as reference, the wave must be between 10 and 12 meters tall.

Given that the series was very popular when it was produced, printing continued until the woodblocks started to show significant wear. It is likely that the original woodblocks printed around 5,000 copies. Given that many impressions have been lost, in wars, earthquakes, fires and other natural disasters, few early impressions survive in which the lines of the woodblocks were still sharp at the time of printing. The remaining prints and subsequent reproductions vary considerably in quality and condition. This gradual degradation is why museums will brag about their prints being “early” issues.

Later impressions typically have a darker grey sky, and can be identified by a break in the line of the wave behind the boat on the right.

Though thousands were printed, it’s estimated only hundreds of The Great Wave off Kanagawa remain. A specimen’s state determines its value. The first state from Nishimuraya Yohachi publishing featured a distinctive blue outline, while the second had a black outline. The former is said to fetch $40,000 to $60,000, while the latter would command half that. Even a good replica could score a collector a few grand.