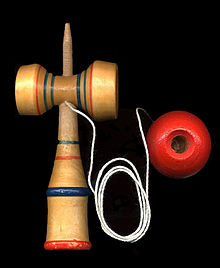 Kendama is a traditional Japanese toy. The ken has three cups and a spike which fits into the hole in the ball. The idea of the toy? Simply to catch one object with the other with both objects being attached by a string…..simple right? well simple to play but very hard to master, see the skills video at the bottom of the article.

Here are the rules…..

To play with a kendama, the easy way, you hold the toy, and pull the ball upward so that it may either be caught in one of the cups or land with the hole on the spike.

Then if you feeling more skilled this leads onto more advanced tricks that include sequential balances, juggles, and catches. There are eleven prescribed moves on the kendama trick list for achieving a kyu ranking and several more for a dan ranking. A 10-kyu rating (the lowest beginner grade) is attained by simply catching the ball in the largest cup. 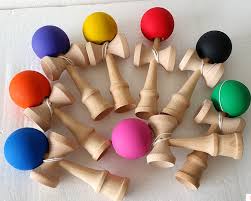 A book published by the Japan Kendama Association lists 101 different tricks for the toy and there are supposedly tens of thousands of trick variations. Different stances and grips are required to perform different tricks.

While most people play with kendamas for personal fun, competitions do take place, especially in Japan, where many kendama shokūgekìs (Japanese for battle) are held. 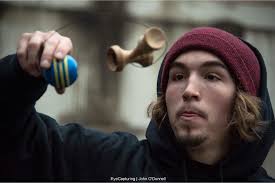 Participation in such competitions entails performing lists of tricks in sequence or completing particular tricks repeatedly for as long as possible. Additionally, tricks may be performed head to head with a rival to determine a winner. The first competitor to fail a trick loses.

Check out these guys below and see the pro’s in action!