Kowhai Montessori Pre-School is situated on a quiet and leafy street not far from Paritai Drive, Orakei. Mio KAWAI teaches Tui Class, which caters for children aged from three to six year old.

It was not until her daughter, Mayna, was born that Mio developed an interest in early childhood education. She studied at AUT for three years to gain a bachelor’s degree in education with speciality in Montessori early childhood education. This provided her with broader employment opportunities both locally and globally. Once she started to learn about Montessori education, its philosophy greatly influenced her own teaching.

Mio worked for Kowhai Montessori Pre-School for four years. Then she moved to Rolleston near Christchurch where she could spend more time close to snow, to enjoy one of her interests, snowboarding. Her daughter was happy to go there, excited with the challenge of a new place. After three years of teaching in Rolleston, Mio decided to take up the teaching position in Kowhai Montessori Pre-School and moved back to Auckland.

The school caters for children from diverse cultural backgrounds, which helps create multicultural school community. The families come from European countries, the US, South America, Australia, Pacific and Asian countries as well as European and Maori New Zealanders. The children learn simple greetings and counting in the languages that the children and the teachers speak. Montessori philosophy respects individual needs, allowing children to choose their own activities and to develop at their own pace. The school also puts great emphasis in children’s health. It promotes good diet and exercise by having daily fitness time, including yoga. Children enjoy practicing yoga poses to relaxing music.

Mio is currently studying part-time for PostGraduate Diploma in Specialist Teaching Programme for early intervention. The school, and the education system in the country as a whole, is increasingly inclusive, and she believes the qualification and expertise will be beneficial both for her teaching at school and for future career such as in governmental organizations.

With her study, work and chauffeuring her daughter to after school activities, Mio has limited time for her other interests except for baking at home. She is hoping to find time to go back to snowboarding and singing in a choir sometime in the future. 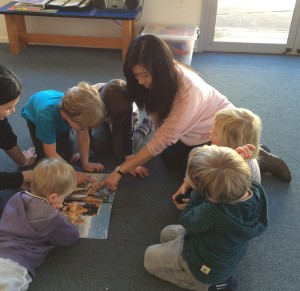