As you may know, Japanese has 3 types of writing such as Hiragana, Katakana and Kanji. Originally each writing have specific characters to write. In Japan, we start writing them properly when entering primary school. Then we start to enjoy Calligraphy culture with a certain brush and ink on special thin paper, which originated in China. Calligraphy’s main theme is “the beautification of character,” both the page and within oneself.

Rie loves writing those 3 types and always copied her mother’s letters. At 10 years old, she started to join the Japanese Correspondence Calligraphy Company (Nihon-Shuji 日本習字教育財団) to learn Japanese Calligraphy. Although she was very busy at her club activity, she never forgot to show her Calligraphy work.

Her another strong will, was to go and live overseas. So choosing a one year study in US at 18 years old, but there was a trap. Arrived at the English class, unfortunately 90% of students were also Japanese, which of course made her prevent from improving English. Ironically, when she came back to Japan, her sister got much better English skills as she had been an exchange student at the same time too. This bitter experience made Rie decide that she would save money to go to overseas again and would never put herself in easy places.

So after coming back to Fukuoka, she was looking for what she wanted to do. In her mind, her passion and interests for Calligraphy got bigger so she decided to start learning it as professional. The Calligraphy school was located in the middle of rice fields so there were nothing fun to do for the most curious ages of youngsters. Rubbing down an ink-stick for 4 hours every day, her days were all into Calligraphy.

The true passion for Calligraphy eventually brought herself to become an examiner and assessor. Stamping 4 times on each 3000 Calligraphy works from all over Japan and then checking and correcting each letters for over 650 papers a day in the way based on the rules were her works for 6 years. Because of the corresponding style, mistakes of judging were never excused.

A Way leading to New Zealand

In 2006, Rie finally left her hometown Kumamoto to make her wish come true. Due to limitations of working holiday visa in the main countries, her choice was automatically NZ. One year and three months Homestay at an English speaking host family was the achievement seeking. Starting working at a monthly magazine company as a sales representative, she realised that all her learnings now linked to her skills and abilities. The delicate care for the balance of Calligraphy letters on one paper helped to create designs for clients’ advertisements on the magazines. 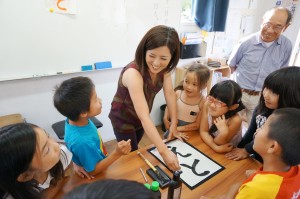 In 2009 she privately started with one student, then opened Japanese Calligraphy class at Ponsonby Art Centre and then moved the class to her own house. “I teach Calligraphy but inversely my students teach me lots of good things such as importance of the ability to take actions” Rie said.

A big milestone was an offer from a hollywood  movie studio “Emperor (2013)” which she was in charge of art department considering (all of the Japanese letters in the movie) the historical backdrop. She had prepared everything for 8 months, even the things that were not supposed to see on the screen.

After that, in 2012 she gained another offer. That was an advertisement for LEXUS “匠 TAKUMI’ series. Her responsibilities were to write the letter “ 匠.” Discussing how she and Lexus can tell its concepts to people by writing the one letter such as the way of writing and shapes, color and speed, finally the perfect one was made. From this interesting work, she again felt the pleasure of making an art and challenging. 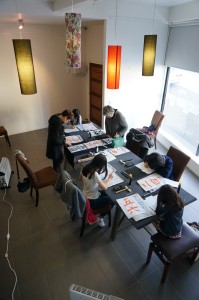 Now Rie Sensei has many students from kids to adults in Auckland. The classes are held 5 days a week and each class takes around one hour.

“It is an art with refined and beautiful technique that requires carefully handling a brush. Each person’s work reflects their own self, their state of mind, their emotions, their mood, and also reveals their personality therefore practicing calligraphy will help anybody. Shodo or Calligraphy helps one to concentrate and be thorough in their work. This is especially true for children” Rie told.

If you have been looking for new challenge for 2016, how about learning Japanese Calligraphy with Rie Sensei? That would make you find a new yourself.