Tatsuya Otomo runs classes to teach Japanese to children in Waitakere, close to his home in Titirangi, with his wife. It is a charitable trust, with about 100 students from age 5 to 16. Each student comes once a week. There are 2 lessons of 45 minutes each. They also have events such as sports day and performance day with songs and dramas. The majority of families are long-stay or permanent residents, and some children came to New Zealand to study for a short term accompanied by their mothers. The fee is $150 for 10 weeks. A lot of families found sending their children to Japanese Supplementary School in Ellerslie hard in terms of cost and the distance, and Tatsuya wanted to ‘return the favour’ to the local families who helped him settle in this country. 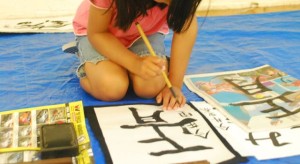 Tatsuya was born in Ibaraki Prefecture. Most people leave for big cities for tertiary education or jobs. But he wanted to go somewhere totally different to find ‘different me’. He majored in marine science in Ryukyu University in Okinawa, the southernmost island far away from mainland Japan. He studied Hoshi-no-Suna, sand of stars. It is a unique sand which makes mysterious sound when you walk on the beach, and is one of the popular souvenirs.

When he graduated from university, instead of getting a job straight away, he again chose to be different. He went to New Zealand using his working holiday visa, and he avoided Auckland, the main big city, to settle in Wellington. He taught Japanese culture in local primary schools as a volunteer while working in a Japanese restaurant.

After returning to Japan he worked for a private company doing environmental research on water quality and then as a teacher in junior and primary school. He then applied for a job in a Japanese school in Los Angeles, where his future wife happened to sit next to him in the staff room. They got married in Los Angeles, and after having difficulty renewing their visa, partly because of 9/11 in 2001, she agreed to move to New Zealand with him as he loved its outdoor activities, work-life balance and thought it best for the family.

He worked for a company taking care of international students and then for the Japanese Supplementary School for a further 9 years, when he felt it was the right time to start out their own. He also runs camps and workshops, where he teaches how to make plastic bottle rockets, slime and candy floss, and invites professionals to teach them how to make tofu, etc. He is a science teacher who wants children to have hands-on experience.

He picked up running in New Zealand. He ran the full Auckland Marathon for five consecutive years and now aims to do the trail run in Tarawera, Rotorua. It will take 5 to 6 hours running up and down the mountain, covering 50 km. To achieve this, he will stop drinking for 5 months, rather than 3 months for the marathons, though he loves drinking. The older two of his four children accompany him by bicycle when he trains. His wife and their baby boy, now six months old, will be cheering at the goal. “The lifestyle I wanted is being achieved.”