In ancient times foxes (kitsune) and humans lived closely together which gave rise to the many legends and stories associated with this creature.

Kitsune are highly intelligent beings and possess many supernatural abilities both good and bad. They are wise and faithful protectors but can also be tricksters and even sometimes malicious. Their power and abilities increase as they get older.

There are two common classifications of kitsune, the Zenko (literally ‘good foxes’) are celestial foxes associated with Inari, the kami (god) of fertility, rice and good luck.

Kitsune are Inari’s messengers, going between our world and the spirit world.

Inari’s kitsune are white, a colour of good omens. They possess the power to ward off evil, and they sometimes serve as guardian spirits. In addition to protecting Inari shrines, they intervene on behalf of the locals to aid against troublesome Nogitsune, those spirit foxes who do not serve Inari.

The fox’s power is such that even just a statue of a fox can ward off evil. Many Inari shrines, such as the famous Fushimi Inari shrine in Kyoto, feature many kitsune statues. 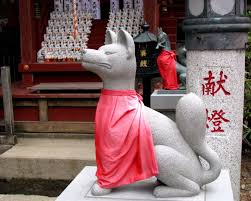 On the other hand, the Yako (‘field foxes’, also called nogitsune) tend to be mischievous or even malicious.

Their victims are usually men; women are possessed instead. A common tactic is for the kitsune to confuse its target with illusions or visions. Other common goals of trickster kitsune include seduction, theft of food, humiliation of the prideful, or vengeance.

Many Kitsune learn newer and more impressive skills as they grow older and can even take on  a human form, some legends say how they take the form of beautiful women and marry human men from good wealthy families or sometimes purely for love.

They can keep this human form indefinably but sometimes struggle too hide their true identity fully with glimpses of their tail or fox features appearing every now and then, or by having a fox shaped shadow or reflection.

Older kitsune can even enter and control peoples dreams as to enjoy spring festivals and human companionship and whatever their imagination can think of. 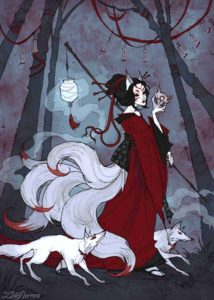 Every 100 years of life, a kitsune will grow a new tail and their abilities reach a new level. Once they reach one thousand years old the fox will become the famed Kyuubi No Kitsune or the 9 tailed fox and its fir will become white/silver or gold and they can see and hear everything going on in the world and have they inherit infinite wisdom.

Other supernatural abilities commonly attributed to kitsune include generating fire or lightning, flight, invisibility, and the creation of illusions so elaborate as to be almost indistinguishable from reality.

Some tales speak of kitsune with even greater powers, able to bend time and space, drive people mad, or transform into inanimate objets such as an incredibly tall tree or a second moon in the sky.

Depictions of kitsune or people possessed by them usually feature round white balls known as hoshi no tama (star balls). Tales describe these as glowing kitsunebi (ghost lights). Some stories identify them as magical jewels or pearls. When not in human form or possessing a human, a kitsune keeps the ball in its mouth or carries it on its tail. Jewels are a common symbol of Inari and representations of sacred Inari foxes without them are rare.

One belief is that when a kitsune changes shape, its hoshi no tama holds a portion of its magical power and represents the kitsune’s soul, the kitsune will die if separated from it for too long. Those who obtain the ball may be able to extract a promise from the kitsune to help them in exchange for its return.

Kitsune keep their promises and strive to repay any favour. Occasionally a kitsune attaches itself to a person or household, where they can cause all sorts of mischief or they use their magic for the benefit of their companion or hosts as long as the humans treat them with respect.