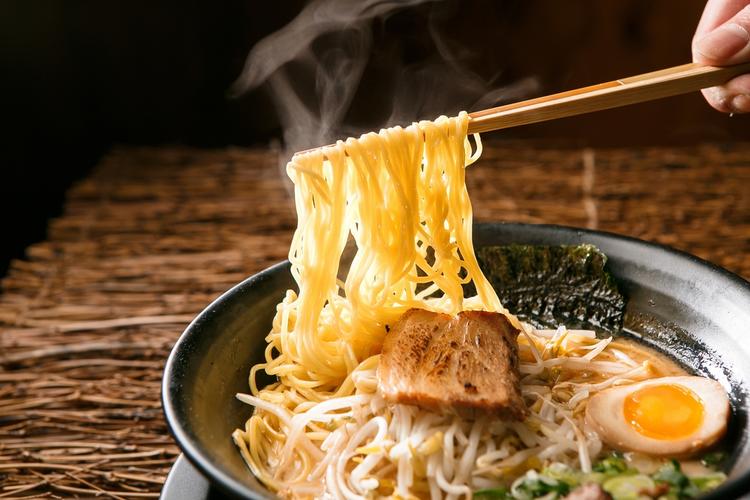 Here we continue on our culinary tour of Japan. Looking at a variety of local specialty dishes around the country that i would like to eat as a whole or at least have a taste of. Last time we started at the top so moving south we will have a look at the Kanto region including the capital Tokyo. If you didn’t read the last edition go take a look but if you did lets get started.

Motegi Yuzu Ramen – Ramen made using the juice and the skin of the small citrus fruit Yuzu is produced in the Motegi area. Known for its refreshing and light flavour and also full of vegetables, makes it a favourite Ramen with the ladies. 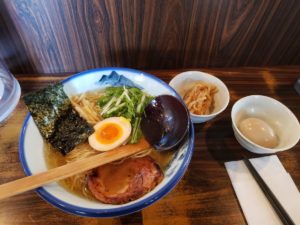 Utsunomiya Gyoza – Utsunomiya is known as the home of the Gyoza, it has over 200 Gyoza restaurants, each with their own unique recipe and style of preparation. There is even a huge gyoza statue in front of Utsunomiya Station. There is also an annual gyoza festival held on the first week of November, Tochigi prefecture is also one of the top producers of chives which is a main gyoza filling 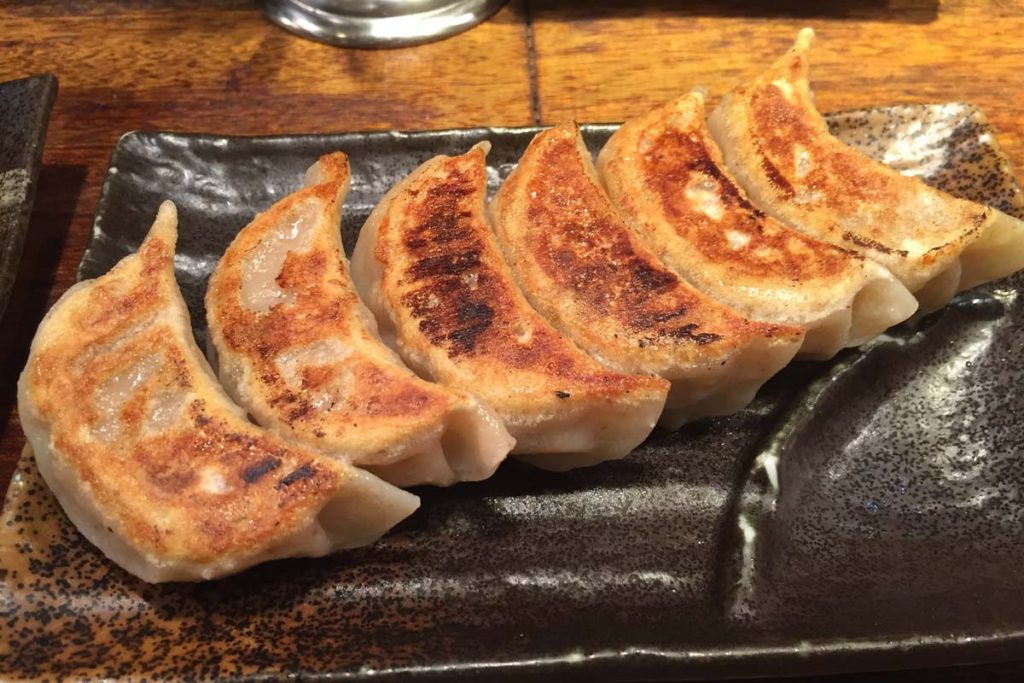 Sukiyaki – Thinly sliced beef and a variety of vegetables including Shimonita leek, fresh shiitake mushrooms and hakusai cabbage simmering away in a sweet soy-based broth hot pot. The official meal of the prefecture with all the ingredients grown and sourced in the area and is a must try. 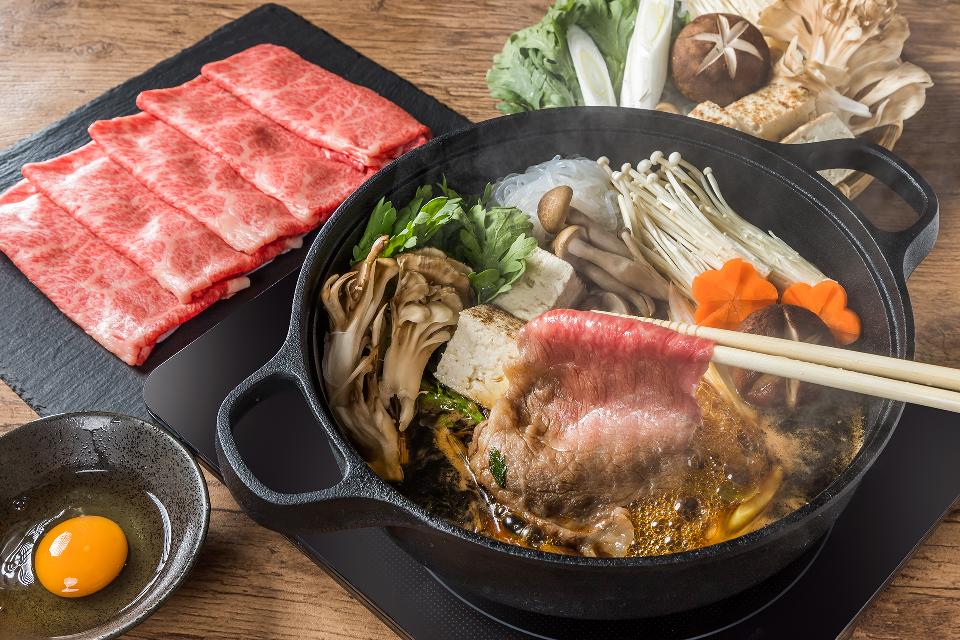 Takasaki Pasta – Gunma is the nation’s leading wheat-producer and Takasaki Town is famous for boasting one of the highest rates of pasta restaurants per capita in Japan. Takasaki pasta dishes are known for their large portion sizes and are popular as a meal that will really fill you up. Also keep an eye out around Takasaki as it is the birthplace of soup pasta. 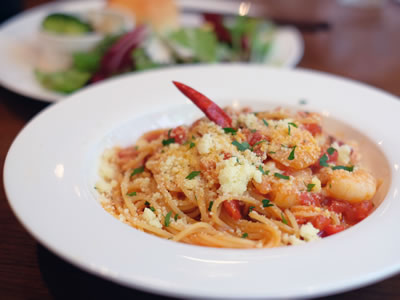 Anko Nabe – Anko (anglerfish) is a collagen-rich deep-sea fish that is often served in a hot pot dish, anko nabe, in the winter. Anko nabe is especially associated with Ibaraki. Nutritious anko nabe also contains fresh vegetables, such as Chinese cabbage and green onions, making it a healthy dish especially nice to eat in the cold winter months. 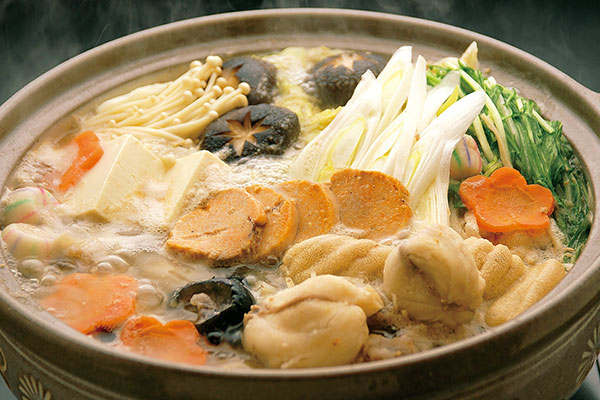 Soboro Natto – Not one for me but loved by many Japanese Natto is fermented soybeans stirred with mustard and soy to create an unusual texture and taste that is not for everyone’s taste. Soboro natto contains diced daikon root to create its own unique taste. Served on rice it’s a local speciality and very very healthy. 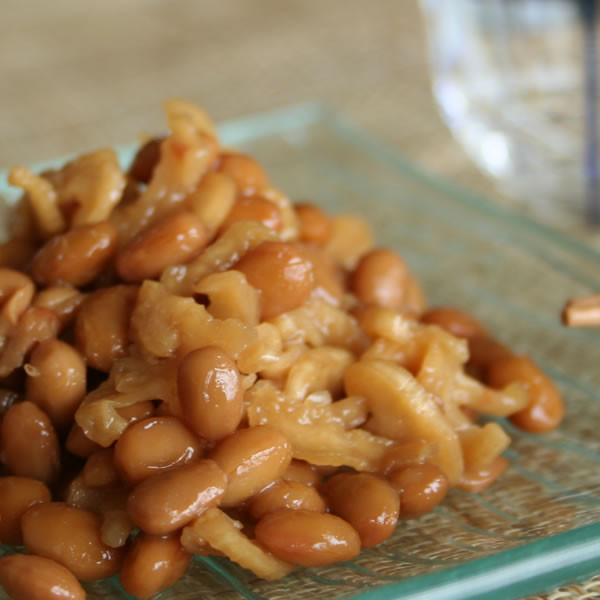 Chichibu Miso Potato – Crunchy baked potato smothered with the sweet-salty taste of miso all on a convenient stick what is not to love bout this Chicibu regional snack. One of the local ‘Kojuuhan’ (a type of cuisine eaten by farmers during breaktime when they just want a small bite to eat) 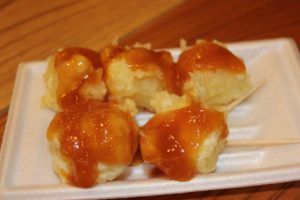 Unagi Kabayaki – Grilled eel has been a staple of the Urawa era since the Edo period as the rivers and wetlands were full of fish and people visited the area to try the speciality eels. Due to development the wetlands and the eels almost disappeared but the 200-year-old flavours have been kept alive through the Urawa Unagi Breeding association. Served simply deboned, butterflied and cooked on skewers over a flame they surely are a must try if in the area. 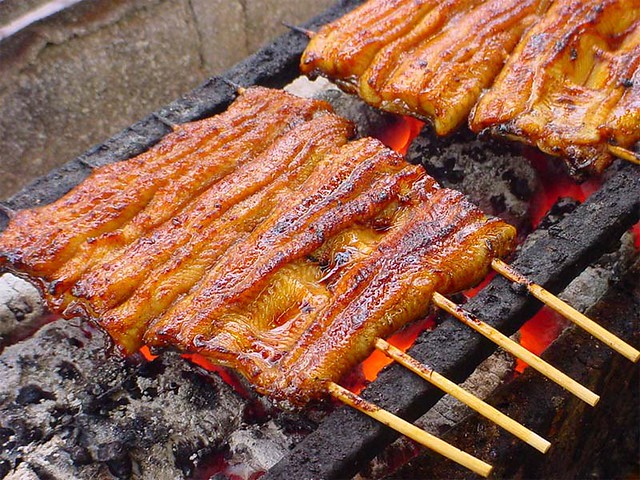 Monjayaki – Tokyo’s version of okonomiyaki. Often just called monja, this fried batter pancake is slightly more runny texture due to fish broth being added to the mix. It contains plenty of cabbage and the batter mix along with toppings such as green onions, cheese, cod roe and seafood or meat then cooked on a grilltop like a pancake 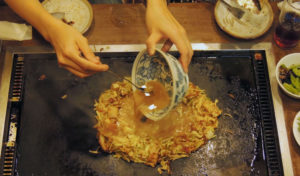 Tendon – Tokyo has some of the best tempura in the country, crispy and light batter covering your favourite seafood and vegetables served on a big bowl of rice. In Tokyo, tendon is typically eaten with a strong flavoured sweet and spicy black sauce which sets it apart from the others. 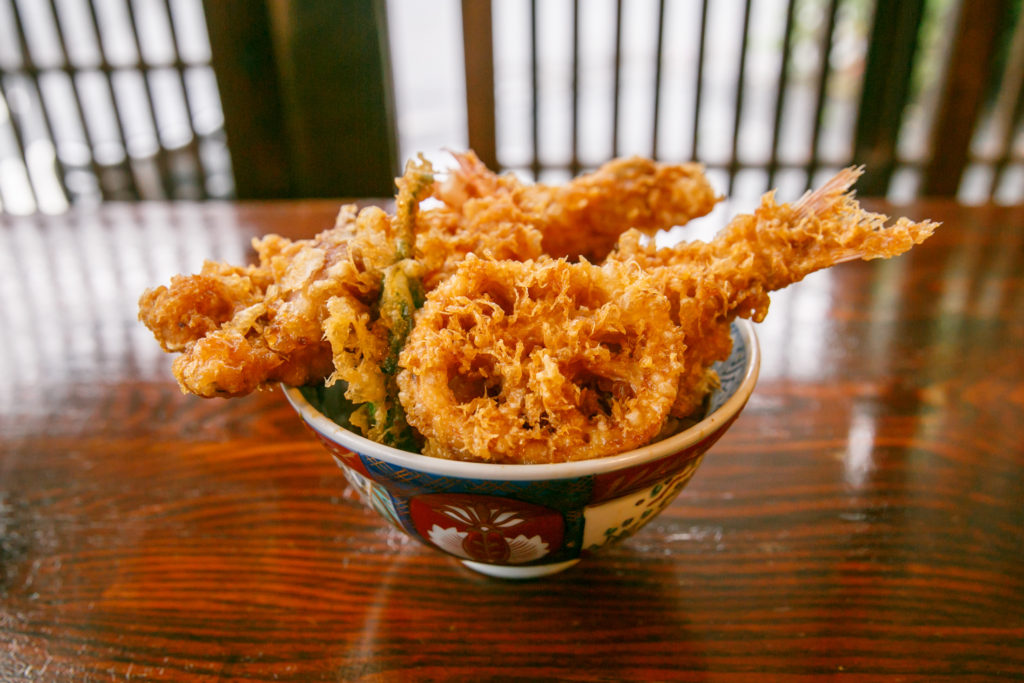 Chanko Nabe – This protein-rich stew is eaten in large quantities by sumo wrestlers during their weight-gaining phase. The soup is usually made from dashi or chicken stock and contains chicken or pork with lots of vegetables and tofu. So many Chanko Nabe restaurants, many owned by former wrestlers can be found around Sumida City 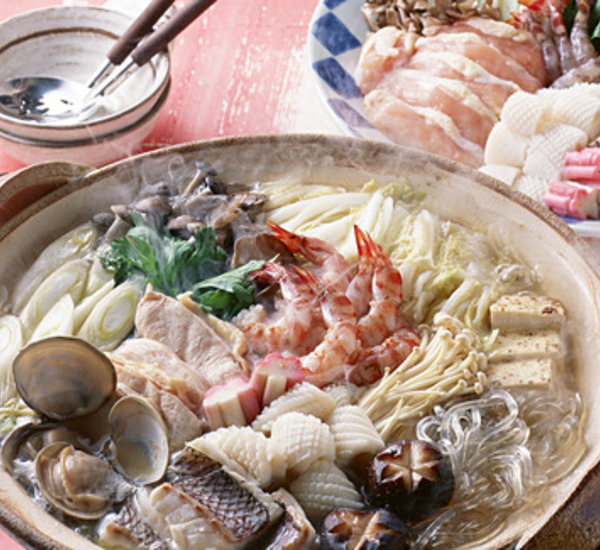 Namerou – A famous local dish of the southern Boso peninsula. Made from a mixture of fish meat such as sardines and horse mackerel mixed with shallots, shiso and miso, all minced together with a sharp knife, the dish is named for the fact that it is so delicious you will lick your plate afterwards. 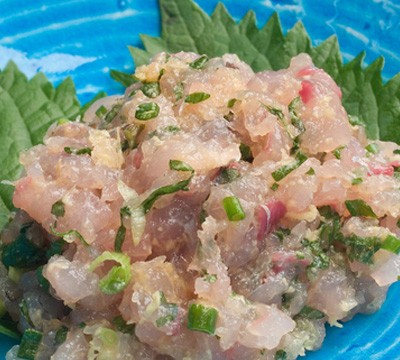 Katsuura TanTan Noodles – The extremely popular ramen noodle dish attracts visitors from outside the prefecture to try this tasty dish. It uses a soy sauce-based soup and plenty of chilli oil instead of the Chinese sesame paste usually used in spicy tan tan noodles and is full of extras such as onion and mince. Great on a winter’s day, or any day for that matter. 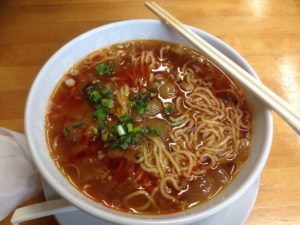 Iekei ramen Yokohama City’s regional bowl, Iekei ramen. The creamy blend of tonkatsu (pork bone) broth and soy sauce broth make for a magical hangover cure. Add to that a generous amount of toppings like spinach, ground chicken balls, and thick slices of pork belly and you’re in for a treat 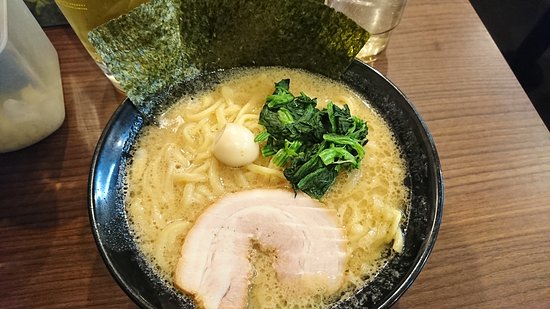 Shirasu don – The dish is made with shirasu (whitebait) – baby sardines, sand lances, and herring. The fish are eaten dried, boiled, or raw with soy sauce. They taste light and salty. Served on a bowl of rice and enriched with the addition of seaweed, Japanese herbs, and sliced leeks, with soy sauce and tare on the side. 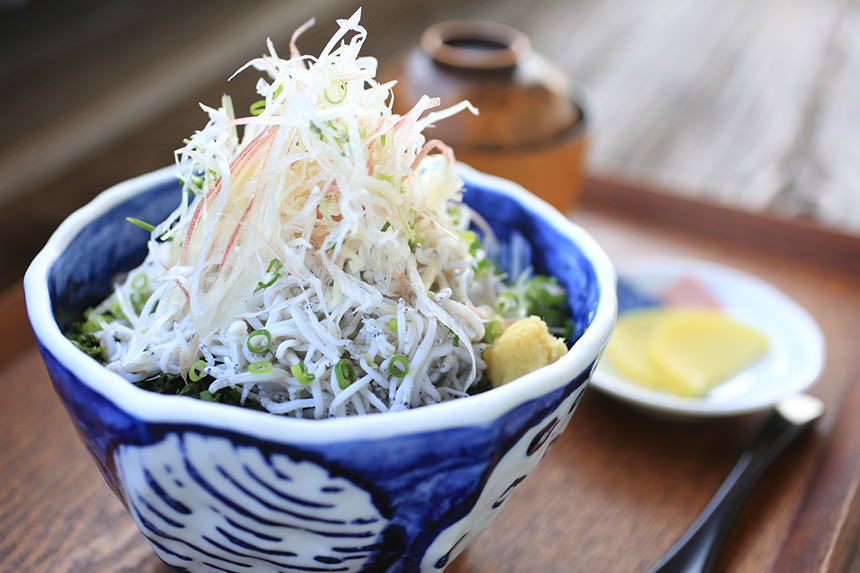 Hope your not too hungry after that, next up we will actually be going to Chubo, was gonna add it to this article but would of been way too long. Doing this has made me realize how big japan is and how many differant types of amazing food they have to offer of all varieties. Let me know your favourites so far