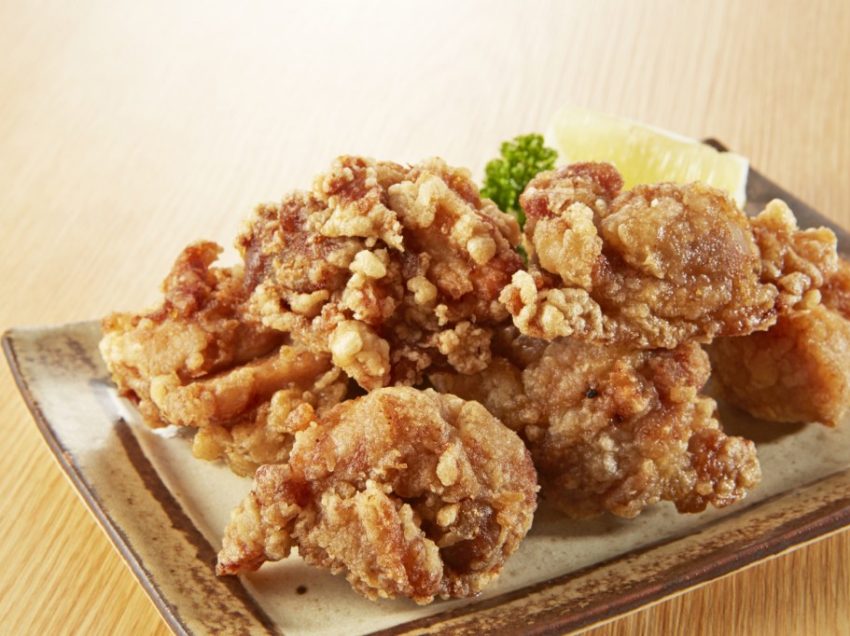 Our food journey around Japan continues in the region of Chubu. Here we take a look at more amazing dishes that i have discovered from each prefecture that i would love to try. Showing you the vast variety of different foods available around the country. Again if you didn’t read the last edition go take a look but if you did lets get started. Just to warn you it will make you very hungry.

Suruten – Look out for this around the Joestsu area, and an alternative to the usual squid tempura. Instead of fresh squid it is salted overnight to bring out richer and more delicious flavours, easily made at home or enjoyed with a nice cold beer at the local izakaya. 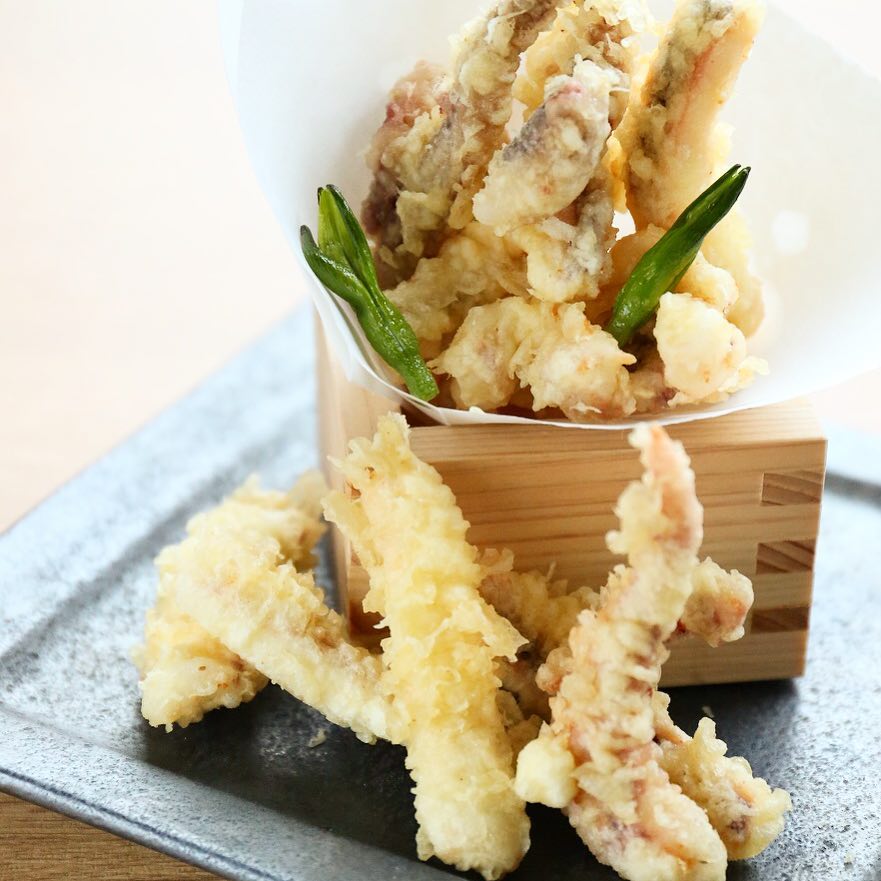 Poppo yaki – This moreish snack is widely loved and is simply made using just whet flour and brown sugar. They are essentially like long thin pancakes with a subtle sugar sweetness and springy texture. Best bought from food stands and speciality shops around the city and eaten fresh for the best taste. Loved by kids and adults alike. 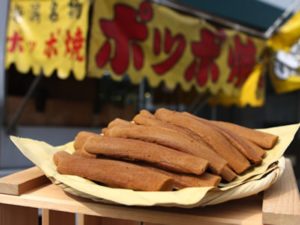 Tare Katsu don – Niigata’s crumbed fried pork fillet on rice is not topped with the usual beaten egg but with a simple, original sauce (tare). The fillet sinews are cut before cooking, making it perfectly tender. The sauce’s great balance of sweet and salty flavour is created with the stock from vegetable soup, pure soy sauce and castor sugar. 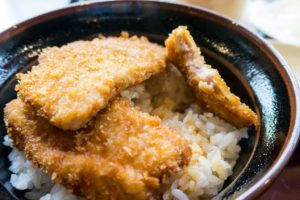 Kaga Parfait – The Kaga Parfait is a 5-layer parfait made with local fruit and vegetable flavoured jelly and sponge. While it is a sweet dessert, the inclusion of vegetables makes it a popular snack food in Kaga. There are 16 guidelines that need to be complied with to be officially certified as a Kaga Parfait, one of those being the price of 980 yen. Because there are various vegetables and fruits in it, it’s very colourful and eye-catching and great for your Instagram. 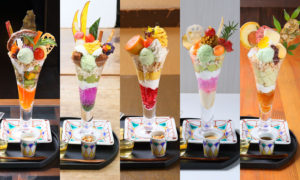 Kamo no Jibuni – Begins with a starch-battered duck that is chopped, bound, and steamed. This is then added to the seasoned bonito broth along with several regional vegetables and brought to a boil like a hotpot. Jibuni is known for having savoury and layered flavours and is meant to appeal to the all the senses when eating. 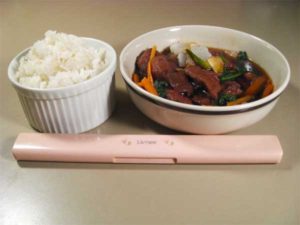 Shiroebi – hailed as the “Jewel of Toyama Bay”, these iconic little shrimps are often prepared as a side dish, for garnishing, or to add to a main dish. In Toyama, shiroebi flavour is especially popular in traditional Japanese snacks — shiroebi chips or shiroebi crackers are common sights. They taste just as good raw or deep-fried with a lot of crunch! 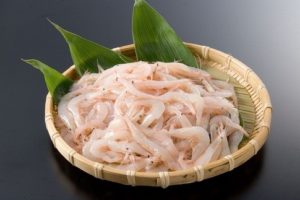 Toyama black ramen- The award-winning Toyama black ramen always pleases it’s it’s consumers thanks to the rich flavour and it’s unique appearance. Acquiring its name from the dark broth the noodles are served in, the saltiness of the black soy sauce base is offset with a light broth that renders the soup a satisfying dish with perfectly balanced flavours.

Oyaki- A type of Japanese dumpling made from fermented buckwheat dough and stuffed with anything ranging from anko (sweet red bean paste), meat, fruit, or vegetables. Oyaki is the heart of the Nagano food scene. Pan fried and then steamed or boiled, the piping hot oyaki is crunchy, chewy, and very hearty.

Nozawana Zuke- Salty, sour with a hint of sweetness, these tangy greens are pickled to perfection and have an unmistakable unique flavour. These pickled mustard leaves, which Nagano is famous for producing, have a natural bitterness to it but when served as a side dish or as a filling, nozawana-zuke is a great addition to any meal from onigiri to tonkatsu 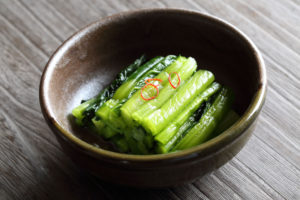 Volga rice- Volga rice has been around in Echizen city since the Showa era and where the name came from is a bit of a unknown. It is a popular dish comprised of katsu (deep-fried pork chop) on top of omurice coated in a special rich dark demi-glaze sauce. Sounds perfect. 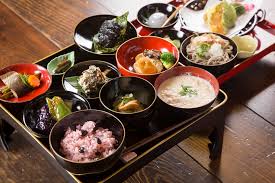 Hoba miso- Gifu’s best-known speciality. The dish features hoba leaves which have been dried and topped with a sweet savoury miso paste which is mixed with vegetables such as leek, shiitake mushrooms, pickles and meat. The whole thing is heated over a charcoal fire. It is a pretty simple dish that tastes so amazing and is best enjoyed with a bowl of steaming rice. 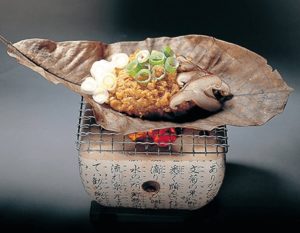 Kei-chan chicken- chicken which has been marinated in miso, soy sauce and garlic. The chicken is pan-fried with vegetables such as cabbage and onions giving it a stir-fry like appearance. It is a very tasty dish that can be found all over the Gujo and Hida districts of Gifu and is a great dish in the heat of summer to provide energy. 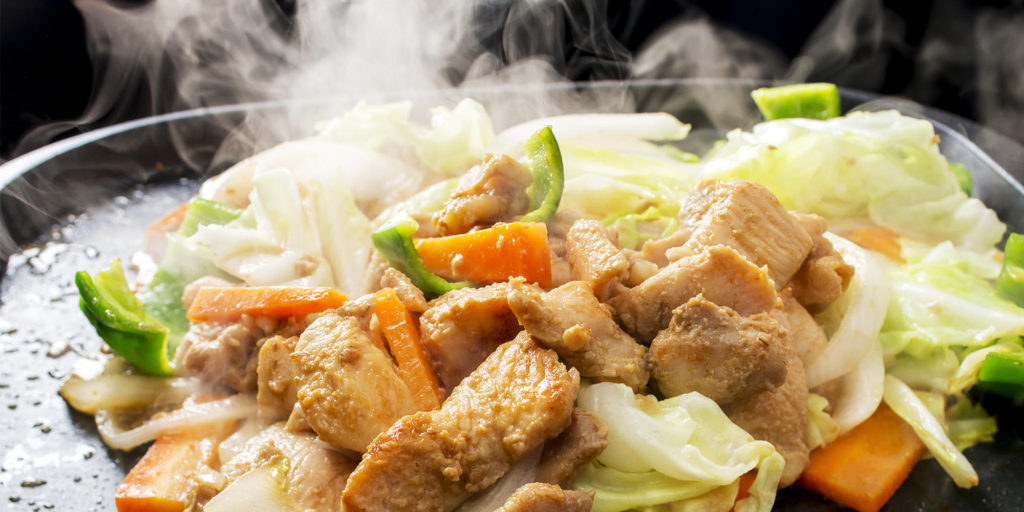 Hoto- A nutritiously balanced and satisfying dish that is a local favourite, Hoto consists of wide noodles freshly made from kneaded flour, seasonal vegetables (pumpkin, mushrooms, potatoes, greens etc) and meat cooked in a miso-flavored soup. 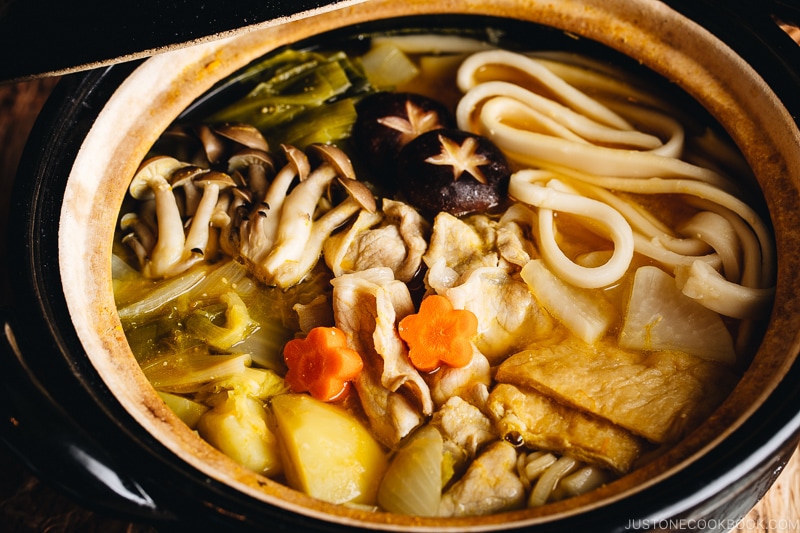 Fuji Mabushi- This dish is receiving much attention as a new delicacy of the region. It is a dish of rice cooked and served with quality sockeye salmon or rainbow trout from Lake Sai. There are three ways to enjoy Fuji-mabushi; eat as it is served, eat with some spices added or add soup and eat it Ochazuke-style (Ochazuke is rice with green tea poured on it). 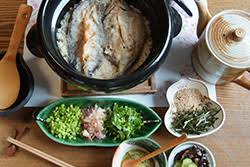 Miso-katsu- Thick, breaded, deep fried chicken cutlet sounds great on its own but when smothered with a rich succulent miso sauce it’s even better, served with rice and shredded cabbage this is a favourite around the region.

Ten-musu- tempura shrimp with miso in a nori wrapped rice ball, simplicity at its absolute best and sounds amazingly tasty. Great as a popular snack. 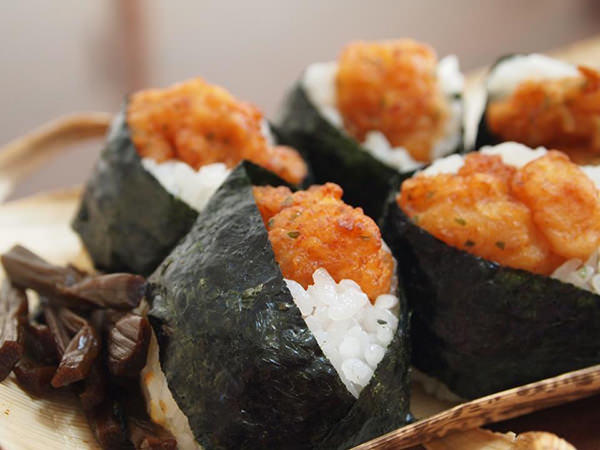 Tebasaki- Nagoya’s famed fried chicken wings, unlike other fried chicken in Japan, tebasaki is not deboned and the traditional serving is crispy with a savory-sweet marinade with garlic, ginger, and black pepper. Other variations hold the sticky glaze and are just seasoned with salt and lots of black pepper. Popular restaurant chain Yamachan probably does the best tebaski I have ever tried. 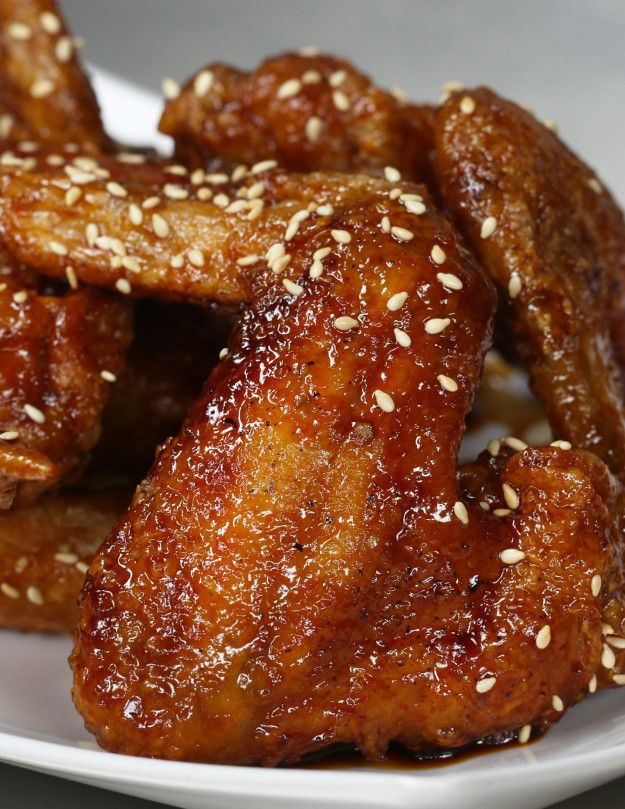 Hitsumabushi– For those who enjoy traditional Japanese flavours. Hitsumabushi consists of grilled eel, which must be served in a special wooden bowl, atop a lavish supply of rice. Eating is a three-step process, First, you must appreciate the flavour of the eel with no additions, then, you add all manner of condiments including wasabi, an onion-based sauce, and seaweed to enhance the eels base flavour. Finally, the third step includes pouring over more of the sauce, turning the dish into a thick soup. Three tastes for the price of one. 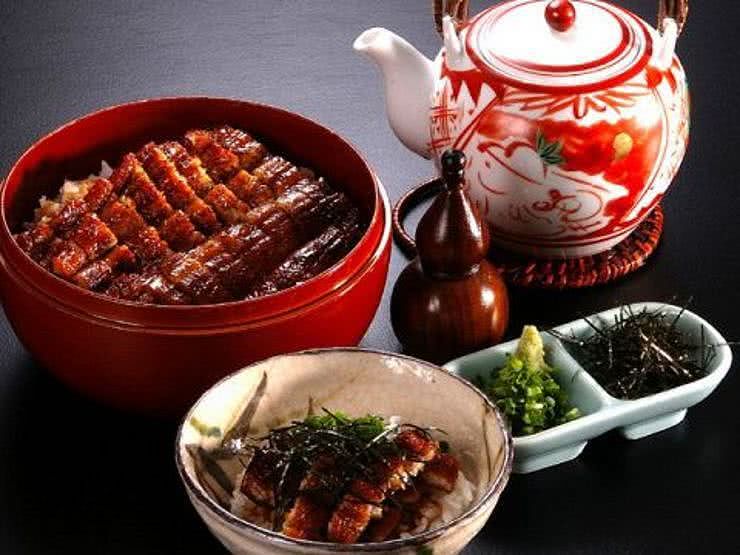 Shizuoka oden- Shizuoka’s regional spin on oden, a typical Japanese comfort food especially popular during the winter months. While locals in the rest of the country enjoy oden eggs, fishcakes, and vegetables in steaming bowls of broth, this prefecture serves its version on a stick. The dashi or broth is robustly flavored with beef tendon stock and strong soy sauce and topped with aonori seaweed, karashi (Japanese mustard), and dried fish powder. 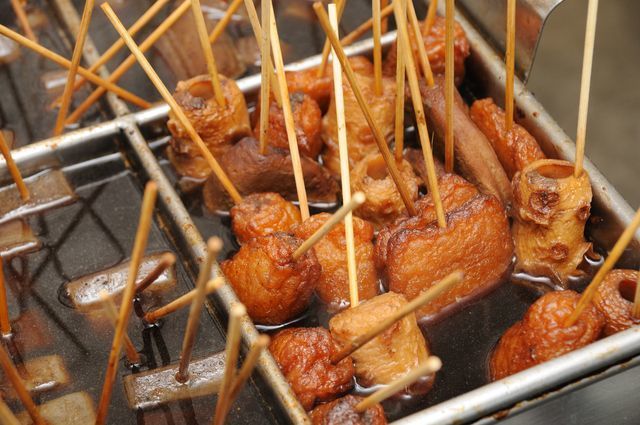 Sakura shrimp kakiage- Sakura shrimp, a very precious ingredient that can only be caught in Suruga Bay mixed with a light batter and fried to make a very crisp pancake, dipped in salt it goes perfect with a few beers 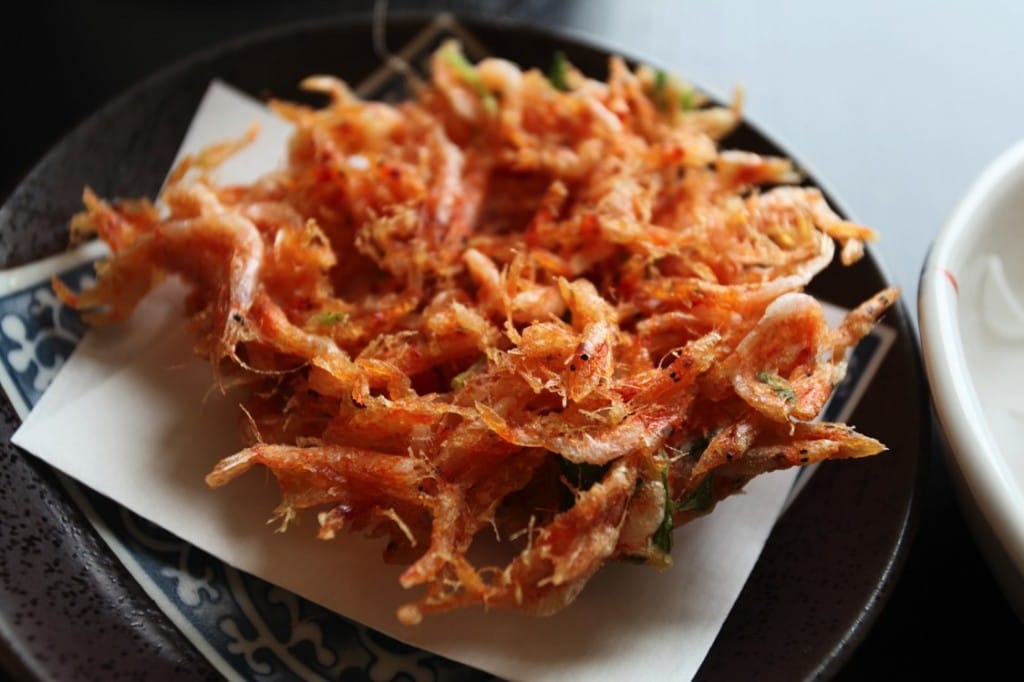 So there we have it 21 amazing dishes from the Chubu region, i think so far this list is my favourite, so many great dishes to try, i think this has tempted me to visit this area on my next visit to Japan. Let me know your favourites in the comments and maybe try to make some of the dishes yourself at home. Next up is Kansai including the so called food capital of Japan, Osaka.