Fugu or pufferfish as it’s also know, is a popular delicacy in Japanese cuisine but it is also extremely poisonous.

Tetrodotoxin, the poison found within its inner organs, skeleton and skin is said to be 200 times more deadly than cyanide and an amount the size of a pin head can prove fatal. The liver is the most deadly part and is not allowed to be sold.

Tetrodotoxin poisoning has been described as “rapid and violent”, first a numbness around the mouth, then paralysis, finally death. The unfortunate diner remains conscious to the end. There is no antidote. 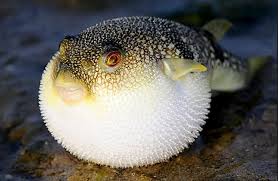 So why take the chance?

Fugu is a delicacy in Japan and is usually eaten for special occasions. It is usually served over a number of specially prepared courses that include sashimi, karaage and stew. It is supposed to taste really good!

If you eat at a restaurant with a licenced chef then the chances of getting poisoned nowadays are virtually non-existent. Preparation is strictly controlled by law. Fugu chefs must go through rigorous training for years to gain the certification that allows them to prepare the fish for human consumption. At the end of the training, there is a test in which the chef must prepare a fugu dish – and eat it! 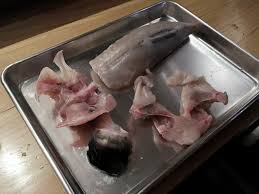 A full-course fugu meal (usually eight servings) can cost ¥10,000–20,000 (approx. US$100–200). The expense encourages chefs to slice the fish very carefully to obtain the largest possible amount of meat. A special knife, called fugu hiki, is used to prepare the fish and is usually stored separately from other knives to avoid cross contamination.