A local newspaper in New Zealand carried an article urging people to catch Koi carp as a pest fish damaging the ecological environment. Like gorse introduced from the UK, often common and unremarkable species become a threat to fauna and flora in New Zealand. I feel sad to see Koi carp regarded as hazardous, as it is cherished and admired in Japan.

Koi is a symbol of promotion, success and prosperity, especially for boys. You see paintings and

carvings made for a gift to boys’ families. Koi-nobori, carp streamers, are flying in the sky in May to celebrate Children’s Day, traditionally known as a boy’s day. Tourists visiting Japan around this time are lucky as they can see all sorts of carp streamers, from tiny paper ones made by preschoolers perched on the veranda of a condominium to dozens of large colourful ones across the river. 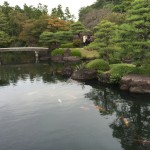 I visited Kokoen, next to Himeji Castle, to walk around the Japanese garden. The mutant Nishiki-goi (multi-coloured Koi) is a must-have item for a pond in a Japanese garden. They are friendly fish, and you can train them to come close to you when you clap your hands to feed them.

Eating Koi was and still is practiced in some areas, though it is getting less common. I don’t know if Koi in New Zealand are safe to eat, but I found a website to tell you how to cook them. Could anyone come up with the idea of aquaculture exporting them to Japan and China as a delicacy? 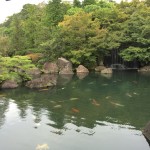