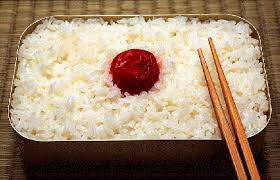 My kiwi friend once described Japanese lunch-box as ‘pretty much like dinner, but cold.’ It has rice, the staple carbohydrate in Japan, some protein such as meat and fish, and vegetables.

Nowadays it is a national obsession, especially for mothers with young children. Making a balanced and pretty 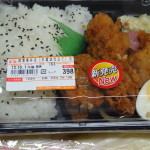 lunch-box is proof of being a good mother. But when Japan was still poor, not everyone had rice in it. Children of poorer families had to hide brown rolled oats rather than white rice in their boxes. They were also lucky to have any protein. During World War II, ‘Hi no Maru Bento’, with one red pickled plum in the middle of rice, nicknamed since it looks like the national flag (Hi no Maru means round sun) was encouraged.

Besides the nutritional balance, the most important thing is that it does not go off in summer. Japanese summer is terribly hot and humid, and lunch boxes made early in the morning may go off by lunchtime. One day when I was a primary school student, my mother panicked and rang my school after eating the same sausages she put in my lunch. I could not be reached because I was on a field trip (this was pre-mobile era) but I came home without any tummy ache, to my mother’s relief. These days there are boxes that suck the air out, anti-bacterial boxes, boxes to be frozen overnight.

Making an elaborate lunch-box is a lot of trouble, and you can buy commercial ones in supermarkets and convenience stores especially for workers. My son is in charge of lunch-boxes in the sushi shop he works for, though he always preferred kiwi ‘sammies’ when he was a kid.