In the western world a person’s taste buds have traditionally consisted of four basic tastes…..sweet, sour, salty and bitter. An idea that was never fully accepted in Japan as they have always believed that their food such as soy sauce, kombu and katsuobushi contained yet another dimension of taste, the taste known as umami.

It all began in 1908 when a professor at Tokyo University, Kikunae Ikeda found that glutamate was responsible for the palatability of the broth from kombu seaweed. He noticed that the taste of Kombu dashi was distinct from sweet, sour, bitter, and salty and named this taste umami.

The taste of umami is described as being meaty or brothy.

People taste umami through taste receptors specific to glutamate. Glutamate is widely present in savoury foods, such as meat broths and fermented products, and commonly added to some foods in the form of monosodium glutamate (MSG). 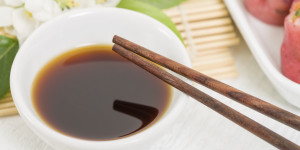 Since umami has its own receptors rather than arising out of a combination of the traditionally recognized taste receptors, scientists now consider umami to be a distinct taste.

Umami has a mild but lasting aftertaste associated with salivation and a sensation of furriness on the tongue, stimulating the throat, the roof and the back of the mouth. By itself, umami is not palatable, but it makes a great variety of foods pleasant, especially in the presence of a matching aroma.

Umami is a key element of Japanese cuisine. It’s arguably more important than the other basic tastes. As a result, ingredients that are high in glutamate are amongst the most common Japanese food ingredients.