From this past midnight on 1st May the whole of Japan celebrated the start of a new imperial era, Reiwa as Crown Prince Naruhito ascended the throne.

Japan is currently in the middle of a 10 day Golden Week holiday as many people took part in events around the country including fireworks, countdowns and parties.

The era name has change from Heisei ‘achieving peace’ to Reiwa ‘beautiful Harmony’. 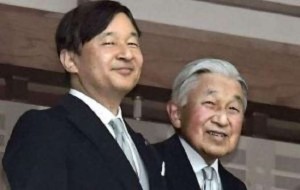 Many people became tearful as the popular Emperor Akihito delivered his last words at his abdication ceremony on Tuesday. Crown Prince Naruhito will become the 126th person to occupy the chrysanthemum Throne since 660B.C.

The name Reiwa was selected by a nine-member panel of experts including professors, scientists and Businesspeople.

The Kanji characters for Reiwa are derived from the Man’yoshu, an 8th century anthology of waka classical poetry

When the air was clear and the wind a gentle (“wa”) breeze.

And the fragrance of the orchids was their sweet perfume.

The system on which the Japanese era names are based originated in China in 140 BCE, and was adopted by Japan in 645 CE, during the reign of Emperor Kōtoku.

The first era name to be assigned was “Taika”, celebrating the political and organizational changes which were to flow from the great Taika reform in 645 and despite a few gaps, from year 701, era names have been used continuously up until the present day.

Historically the first day of a new era starts whenever the current emperor chooses and can be due to a change of power, down to an event or changed because of a natural disaster and the need for a change.

There have currently, including this new era been 248 different era names.

I’m sure the celebrations will continue for days to come as people enjoy their holidays and time off of work.