You can get a robot like Baymax into your house too in the near future!!

SoftBank, a technology and mobile communications company stated to sell a robot ‘Peeper’ at 10 AM today, and all of 1000 robots were sold out within 1 minute.

Pepper, described as a humanoid robot with a “heart”, is able to recognise human emotions before reacting with simulations of feelings such as anger, joy, irritation and sadness.

The company will release 1000 robots onto the market every month, selling for an initial payment of Y198,000 ($2330) plus monthly service fees in a three-year-contract.

Businesses in Japan will also be able to rent the robot for Y1500 an hour while overseas sales will most likely be launched next year.

What Pepper can do? 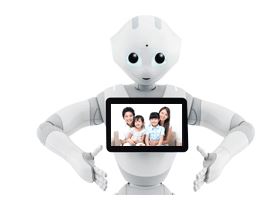 Basic applications has been installed in Pepper.

As initial installation, Pepper can memorise family’s names and faces, talk, take photos, play with kids, dance, tell you news and weather and look after your house.

And you can install a variety of other applications and customise him to your original Pepper!