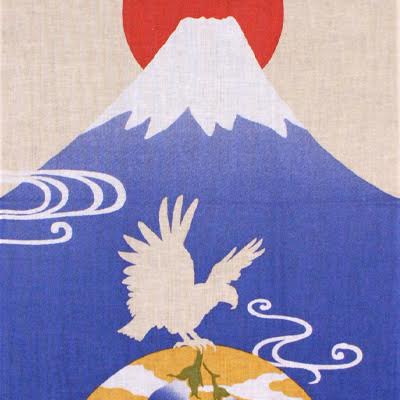 In Japanese ‘Hatsuyume’ is the first dream you witness in the New Year. It is

a concept taken rather seriously.

them on the details of their first dream.

However there are three interpretations. From New Years Eve to new years

day, new years day to the 2nd of January or the dream you see on the 3nd of

‘Setsubun’ the beginning and spring and the actual first day of spring. This

was outlined in the collection of Japanese poetry called ‘Sankasyu’.

In the past the first of spring was seen as the new year, so nowdays its from

years eve television and going to visit the shrines and temple (Hatsumoude),

there are a lot of people who don’t sleep. In fact even a long time ago to bring

in the god of age, many spent all night in the temple, so their situation was

From the Muromachi era, the painting of the treasure ship the 7 gods paddlng

in what is said to be the new year, is seen as lucky if put under your pillow.

Therefore with this in mind, from just after the Edo period the time frame gave

everyone some leaway and now its up until the 3rd of January.

destined for a lucky year. There used to be a belied in Fuji so that’s self

explanatory. The main temple for this belief was ‘Komagome Fuji Jinja’ and

beside it was a falconer’s mansion. The ‘Komagome Eggplant’ was famous in

In simple terms Fuji is the largest mountain in Japan, Falcons are known as

For these reasons they have become lucky symbols. However this belief

yourself before bedtime to dream up any of these three images.