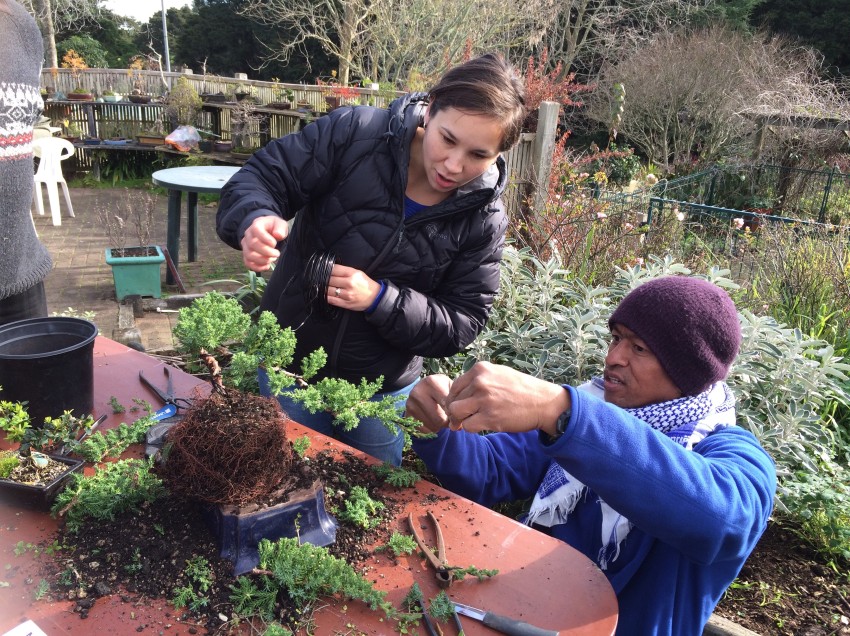 On a Sunday afternoon I attended the July meeting for Franklin Bonsai Club. The venue is on the deck of Fiona Macdonald’s house situated between Pukekohe and Waiuku, overlooking the extensive garden in the rural setting. There were about ten members, a good mix of young and not-so-young, working on their bonsai and consulting with experienced members.

Bonsai means ‘plants on a tray’, a small tree in a small pot which looks like a big mature tree and/or the landscape. 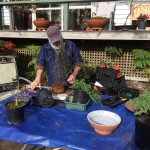 Malcolm started bonsai after he saw an exhibition in 1979. Fiona, the garden coach at Steel Magnolia, started when she was eight. Gerry, who started twelve years ago, was showing one of the new members how to use wire to bend branches. Justin 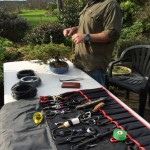 who runs ZenZone in Pukekohe, was active as a bonsai artist in South Africa before he moved to New Zealand. Jeremy Boyd started in 2009. Fiona said, “This club is fairly new, only four months old. Malcolm, Justin and I found out that we had been doing bonsai on our own for ages and decided to start up this club.” 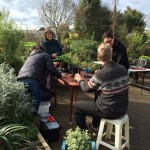 My father was a keen bonsai hobbyist specialized in 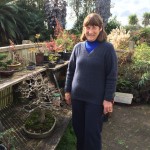 Azealia. They use a variety of trees, but choose ones with small leaves. Japanese and English maple; New Zealand native such as kauri , corokia and kowhai; South African Kameeldoring; Pine, camellia, crab apple, macrocarpa (‘a bit brittle’) and juniper which is fairly easy to handle. 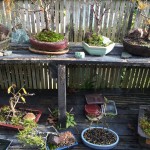 Malcolm said, “It’s therapeutic but it tests your patience.” Gerry also said that you don’t want to stress the tree by trying to bend it too much at once but you bend it slowly over the weeks. Other members said that Bonsai “brings the forest into a room,” and “miniaturizes nature by emulating the shape.” “It’s more interesting than pots of plants indoors,” and “It’s never finished.”

Brian plans to visit Japan in 2019, to combine his interests of Rugby and Bonsai. I know a lot of famous gardens but could not name one famous for bonsai, or an exhibition. I promised that I would do some research and get back to him.