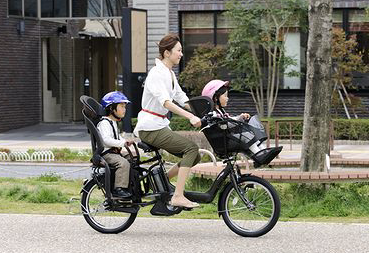 Legacy of John Key? Cycle trails. It’s great to cycle without worrying about passing cars. I was once hit by a car when I was going home from work in Japan. 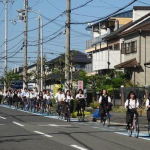 school. The number of bicycles in Japan is estimated to be around 70 million, but no one knows for sure as many are not registered. Kyoto has the highest percentage of cyclists (45%), because of its flat contour and the large number of students living there. 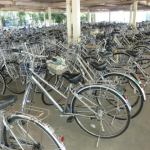 I rode my bicycle to the nearest station, and then caught a train to my university as a student and high school as a teacher. A number of my students rode bicycles to school, which has a large covered space for parking. (Students driving to school is out of the question in Japan.) But I had a university friend from Kobe who never rode one, as parts of the city are very hilly.

Mothers ride bicycles with their small children. The type of bicycle is nicknamed ‘mama-chari’. It looks precarious to have a kid propped at the back seat, and indeed there are some sad accidents.

Parking is the issue. The station I used to use had some free parking space, which got oversaturated. The 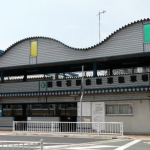 city council built a purpose-built parking, and my daughter registered her bicycle to park there with a fee (¥8740 for six months).

You can buy a reasonably priced bicycle in one of new and second-hand cycle shops. Unfortunately, stealing bicycles is fairly common. You will need to register and insure the bicycle, but strangely enough you don’t have to wear a helmet.  Also we have not only ‘Don’t Drink & Drive’ policy but also ‘Don’t Drink & Ride’.