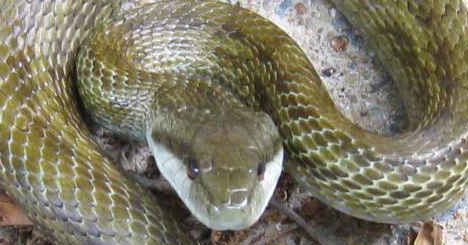 When I first came to New Zealand, I was puzzled that many people asked me about snakes in Japan. I wondered, “What’s so special about Japanese snakes?” It turned out that New Zealand has no snakes. Wow! This land is Garden of Eden without the evil snake!

In Japan snakes are fairly common. You may see one in the bush or in rice fields. In the suburbs it is increasingly rare to come across one, so my son and his friend were excited when one was found near the apartment his friend lived. Of course children are strictly told not to tamper with snakes, as it is likely they bite and some of them are venomous. In some parts of Japan certain snakes are venomous enough to kill.

Snakes are regarded as sacred in legends and myths in Japan as well as in many other cultures. ‘Snake Wife’ is a well-known folk tale. Japanese Folk Tale ‘Hebi Nyobo’

I became very ill when I was six and the visiting doctor called an ambulance. When my father carried me from the house to the ambulance, my mother saw a huge snake slithered in front of us. My mother told me later that snakes are said to be sacred guardian of the household and turn up when something serious happens.

When you go tramping on the main islands, mind that two out of ten kinds of snakes are venomous. In subtropical islands of Okinawa and other islands, ten out of 38 kinds are venomous. If you see one, take photos from the distance for souvenirs, and run for your life!