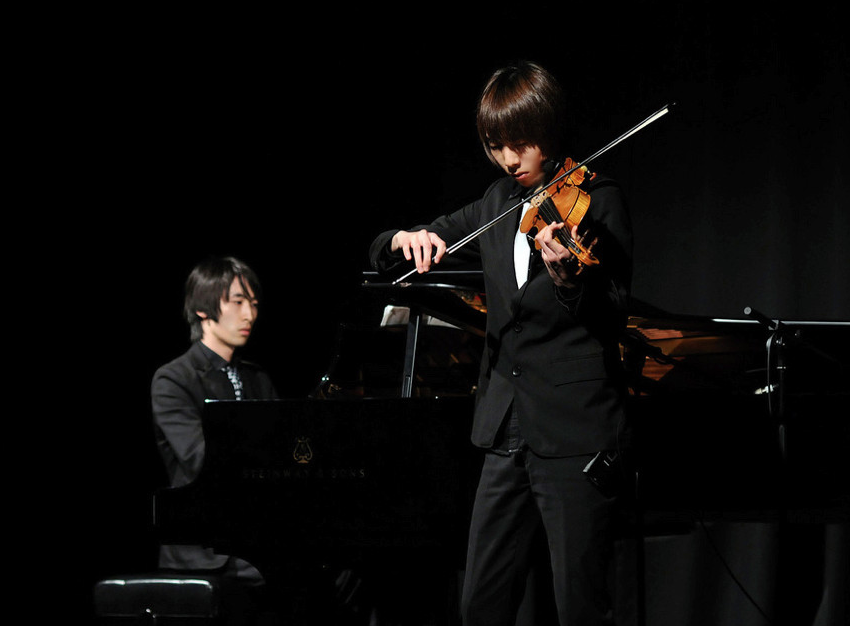 I talked to Kent Isomura, a pianist, and Shauno Isomura, a violinist, after their duo performance at the Auckland Coming of Age Ceremony in January. Together they are the Isomura Brothers, two young professional musicians based in Auckland. Even though I know little about classical music, I was deeply moved by the high standard of their musicianship.

Although both Kent and Shauno were brought up in New Zealand by their Japanese parents, their Japanese language and manners are very polite and formal.  Asked how they achieved such a high understanding of the language, they told me that they taught themselves, mainly by visiting websites. Kent explained, “We have performed in Japan and have contacts, so we decided that it is a must for us to master the level of Japanese that is suitable for business. We didn’t want to make excuses that we weren’t educated in Japan.” Shauno is in charge of their website in both English and Japanese, and he also designs brochures and pamphlets, often for his friends too.

Encouraged by his mother who is a lover of classical music, Kent started to take piano lessons, and Shauno did a couple years later, both at six-year-old. They had lessons at primary school, and the teacher suggested Shauno switch to violin. Kent and Shauno both played Rugby at school (their father is a great fan of Rugby). Shauno also practiced Karate to a high-ranking belt. I asked them if they ever thought about quitting the music, but they said they enjoyed it and that practicing every day has become a routine for them. Asked if there is ‘sibling rivalry’, they said it is lucky that they play different musical instrument and it is supportive and compensating each other rather than competitive. Kent said, “When I feel a bit down, I watch my brother practicing and feel encouraged. I should try harder to keep up with his standard.”

Kent holds a Master of Music with First Class Honours and Shauno has a Bachelor of Music with honours, both at the University of Auckland. They have attended competitions and concerts in New Zealand, Japan, Germany and the US, collecting numerous awards and critical acclaim between them.  I asked them the reason why they are based in Auckland rather than in Europe. “The atmosphere in Europe is different. Germany, for example, has a long history and there is certain traditional attitude to music. Here, people come from various countries, and being away from the rest of the world, the music is diverse and free-spirited. We enjoy being close to our audience. We can go to Europe and the US, and bring back what we have learned there and develop it to our own style, which is an advantage. We would like to give something back to New Zealand.”

I have a son who is an aspiring Jazz trombonist, and asked them what is the most important thing for a musician. Shauno said, “Connecting with people.” I believe I am witnessing the best example of hybrid of the two cultures. Go, Isomura Brothers! 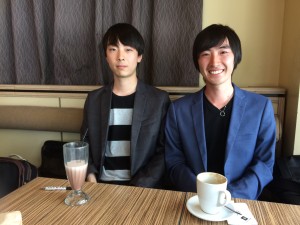