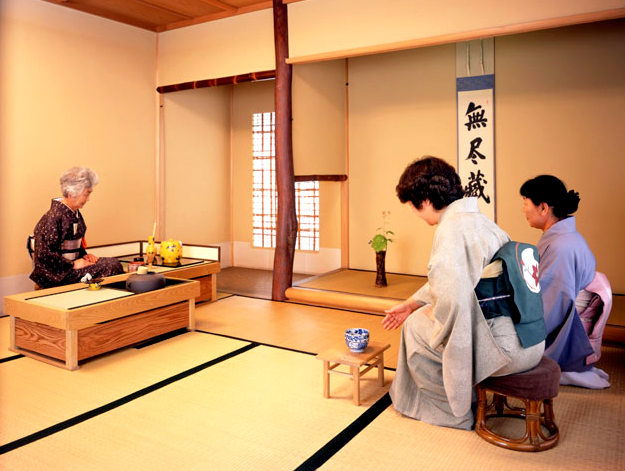 Everybody enters the tearoom on once knees, which is a very strong symbol coming from a rigid society with a hierarchy and social order. One sits in ‘Seiza’ which is where one sits on ones legs, resting on the back of ones feet. The tea is prepared and then served by the teacher and an assistant. The tea of choice is ‘matcha’ a type of green tea, and it takes around thirteen instruments to make the tea.

In a ritualistic manner each item is purified or cleaned meticulously, for the eyes of the guests to see.

Only then is the matcha tea powder placed in a bowl, to which hot water is added, albeit at a specific temperature. Then this is vigorously mixed and then more hot water is added when the powder and water are mixed into a thicker paste. The tea is whisked with a whisk made by bamboo called a ‘chosen’.

To the untrained eye the teacher is simply making tea but in actual fact he is following the tradition of his ancestors and has in most cases studied for many years to do so.  Firstly the main guest receives the tea, naturally bowing before receiving it. The bowl will be embellished with a design on one side which faces the guest. The guest must then raise the bowl look at the design and then slowly rotate the bowl with the right hand holding the bowl with the left. The guest then drinks three sips, then wipe the rim before passing it to the next guest. In some cases each guess is given a separate bowl.

After which a thinner, lighter bowl of tea is made to clean the palate in a sense. This can be served in a slightly more elaborate bowl to the first. Lastly a Japanese desert is offered to each guest. This is eaten with a fork made from bamboo called a ‘yougi’. Guests may be offered a cushion after this last tea is drunk. The conversation is led by the head guests, generally about the utensils, the tea and the ceremony. The ceremony ends and each guests expresses their gratitude for the skill of the host as well as the tea.

During the tea ceremony, the head guest leads the conversation with the host about the tea and utensils used for the ceremony.  They also talk about the flower arrangement and the hanging scroll in the ceremonial niche called a tokonoma.  When the tea is finished, the guests express admiration for the tea and the skill of the host, then they take their departure.  The philosophy behind the tea ceremony is reflected in may areas of Japanese life and thinking. It is a very deep and spiritual practice, not merely the brewing of a cup of tea.