The lyrics are from a poem written around the 10th century and the music was chosen in 1880. The following is the translation of the lyrics:

The issue is that ‘you’ is interpreted as the emperor. The song was used as the national 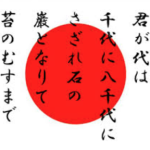 anthem from 1888 to 1945, the end of the Second World War. Though the song had been used as a de facto national anthem, a number of people including politicians opposed the law that the conservative government rammed through in 1999, as they deemed the song not suitable for a democratic Japan. After the passage of the law, the Ministry of Education pushed public schools to fly the flag and sing the anthem. I was one of the teachers who hated, not so much the song itself, but the imposition and punishment for not following MOE instructions.

When you hear the song, it is short and quiet. Some say it is solemn and others say it is not inspiring, and there is no distinct ‘ending’. Though most of us accept this song as a national anthem, I wouldn’t mind if another one is chosen in the future.