2016 is the year of the monkey. The image of the animal is everywhere, from calendars to New Year’s greeting cards. 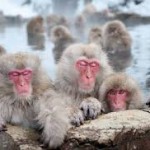 I met my doctor the other day, and he told me that he visited Nagano Prefecture in Japan, where the tourists were taken by bus to see Japanese native monkeys in hot springs in the snow. I must confess I have never seen a wild one, so I envy him.

I recently watched a TV programme, David Attenborough’s Life by BBC. It featured Japanese monkeys, ‘Japanese macaque’. It showed them relaxing in a hot spring, but it ruins your image of native monkeys in bliss and in peace. It tells you that monkeys’ society is highly hierarchical like humans’, and high rank mothers won’t allow low ones to enter the warm water. It is a very cruel act that may lead to death for some young monkeys. I didn’t tell this to my doctor. 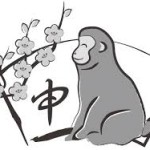