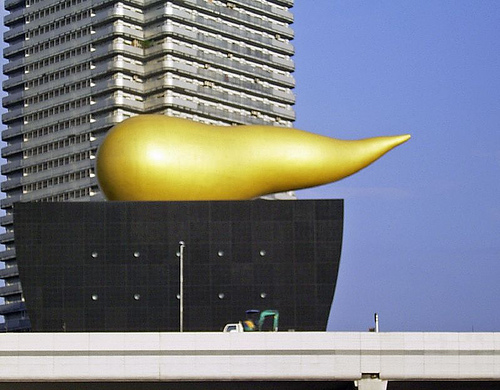 In the Asakusa area of Tokyo on the east bank of the Sumida River is one of Japans most recognizable and photographed buildings, the Asahi Beer Hall, which stands alongside the Asahi Breweries HQ.

The reason for its popularity is what is on top of the Asahi Super Dry Hall building, The Flamme d’Or or the Golden Flame……or the ‘Golden Poo’ as its better known. 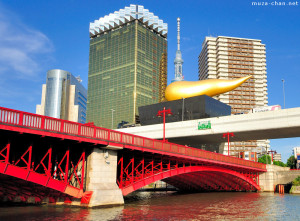 The 300 Tonne flame was designed by renowned French architect Philippe Stark during Japans boom years and was built by shipbuilders using the same techniques they use to build submarines and covered in gold leaf so it shines high up in the skyline. It is supposed to represent the freedom and grace of a good head of foam on your glass of Asahi beer but to many it just looks like something else.

The golden flame was originally supposed to stand upright as you expect a flame to stand but due to complaints of the structure blocking the sun and view from other buildings it was put in place on its side.

Next to it stands the 100 metre high Asahi HQ which represents a giant beer jug complete with its foam shaped white roof, which actually does resemble what it is supposed to. The buildings are actually built on the site where Asahi originally started brewing beer a century earlier. 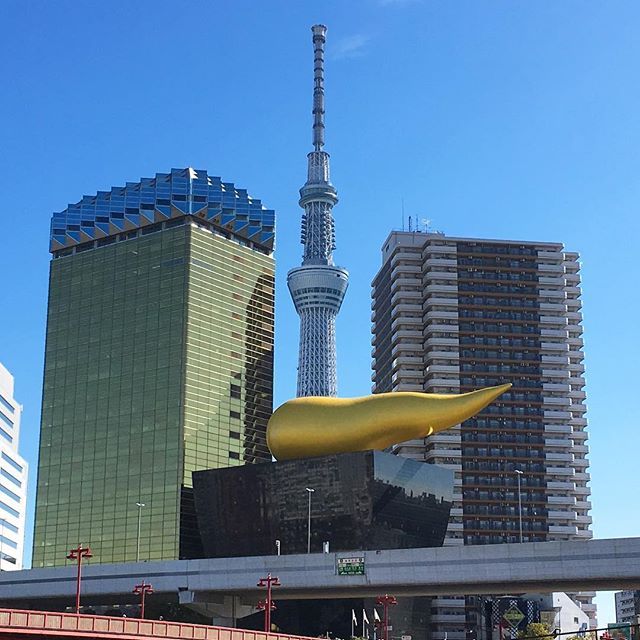 Regardless it definitely adds to Tokyo’s amazing skyline and the buildings together with the SkyTree nearby make for some great photo opportunities and I defiantly recommend a visit it is a sight to behold and iIf all this looking at buildings makes you thirsty you can visit the buildings 22nd floor and enjoy a nice cold glass of beer and some food while enjoying the views in one of the bars  and maybe taste some limited run Asahi beers that are on offer.