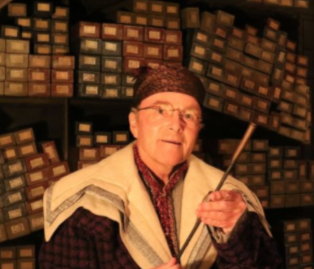 Jack Walley is a wandkeeper at Ollivanders in the Wizarding World of Harry Potter, at Universal Studios Japan. We have been family friends since our kids went to the same high school, and I skyped him to ask about living and working in Osaka.

Jack moved to New Zealand when he was six with his English father and Irish mother. After living in Wellington and completing his teacher’s training, he applied for a job in the South Auckland/Waikato area. His teaching career spanned over forty-five years, which includes stints in South Africa, England, USA, and Japan.

The teacher’s collage had a drama club, and he got involved in local 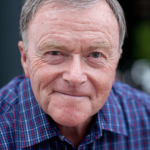 theatres in Wellington and Tokoroa. After coming back from Japan in 1996 he saw an opportunity in blooming film industry and auditioned for and acted in a number of films, TV shows and commercials.

After he retired from teaching, he saw a website recruiting actors for Universal Studios Japan. “Having lived in Japan, knowing its culture and language, it seemed a great job for me.” He flew to Gold Coast for the audition and got shortlisted. He was not selected, but he decided to give it another go as he had got so close. Next year in Brisbane, he nailed the job. 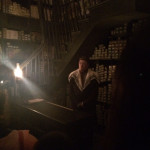 Jack finds it exciting to work for such a big international company after working in small local schools. It is an interesting but challenging job. Learning scripts both in English and Japanese is one thing, but also as the show involves interacting with guests, he has to be flexible, switching between the two languages.

Jack lives in an apartment provided for staff members. “It is a cosmopolitan community with 150 foreign actors.” One family member

at a time is allowed to stay there and his elder son stayed in July, his wife is coming in September, and his younger son will stay from Christmas to the end of his contract in January. He recently visited Osaka Castle with his elder son, and is interested in visiting Wakayama Prefecture, south to Osaka famous for its natural features.

Jack has been a runner throughout his life, and he was one of the lucky runners who could run across the new bridge from soon-to-be-opened Kansai International Airport to Sakai City. He is going to run in the Kobe Marathon held in November, from Kobe CBD to the Akashi Kaikyo Bridge and back.

“The second life”, we call a life after retirement.  Jack is a living proof that it can be full-on, an exciting new chapter of life. 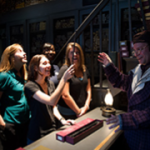