Earlier this Week in Kyoto the draw for the Rugby World Cup to be held in Japan in 2019 took place.

The Brave Blossoms will share pool A alongside Ireland, who were the top seeds and Scotland as well as too other lower seeded teams that are yet to be announced.

They have struggled to build on that momentum since, but avoiding the likes of the All Blacks, England and Australia in the group stage at least gives them a fighting chance on home soil.

“I read in the paper that we’re in a favourable pool,” shrugged Joseph. “But Ireland have beaten England and the All Blacks and in my mind are the third best team in the world.

“And Scotland is a team who, like Japan, are a very proud nation,” he added.

“There are two ways to look at it,” he said. “You can play one of the tier one teams straight away and if you’re successful — like in 2015 — you get a lot of confidence going forward and have a successful tournament.

“Or you lose and that puts a lot of pressure on the team. Then if you lose two, the tournament’s over. Thankfully I don’t have to make that decision. I’ll accept whatever’s coming and prepare accordingly.”

Japan conveniently host Ireland and Romania — expected to be the third European team to qualify for Pool A — next month and Joseph is adopting a no-pain, no-gain attitude in the build-up to the World Cup.

“Next year the experience we get playing tough teams will be our best preparation,”

“There is going to be some short-term pain but playing teams that are ranked ahead of us is the way forward.” He said 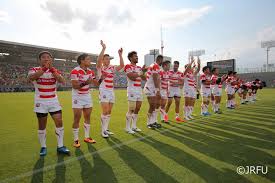 Whatever happens I know the whole of Japan will be behind the team and a lot of other nations will support the team as their ‘second team’ after the last world cup outing!

I will defiantly have my jersey on supporting them! (As well as the All Blacks of course)