On the night of the 27th of September this year, millions of people in Japan will be looking up at the moon. It is the day of Moon Viewing.

Hana-mi, ‘flower viewing’ is well known as one of the Japanese traditional events in which people gather under the cherry blossoms in spring. We also have Tsuki-mi, ‘moon viewing’ in autumn. What we need for it are dumplings, silver grass (Japanese pampas)   and the full moon, though the activities and offerings vary according to the regions. The picture shows a rabbit pounding rice cake on the moon, which is the equivalent of the man in the moon. 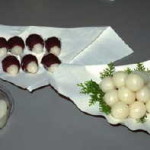 The date falls on a September day according to the lunar calendar (no surprise!) It is the time when the sweltering hot days have finally gone and the air is cool and refreshing. At night you can hear the chirping of insects, and the atmosphere is serene, unless it is raining or cloudy (which often happens). At home, you usually don’t do anything except prepare offerings. Just sit and look at the moon. It has calming effects, it is therapeutic. (You can also enjoy the dumplings later.)

The moon has a special place in heart among the Japanese. It is a source of numerous poems and the first story in Japan (no later than the 10th century AD) is about a princess from the moon. (Personally I think this is the first science fiction in Japan, if not in the world.)

On the 28th of September we will have a Supermoon here. So why don’t you try looking up at the full moon, with a glass of wine or a bottle of beer, sitting on a chair in the garden?  It’s spring, so you may have a Hana-mi under the cherry tree at the same time!  It will make you reflect on your life and give you energy from the moon to live your life to the full.