After three hours on the Shinkansen, enjoying ‘eki-ben’, lunch boxes bought at the station, we arrived 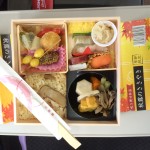 at Kanazawa, the terminal of Hokuriku Shinkansen and the capital city of Ishikawa Prefecture. We did not stay there long as we had planned to drive to Nanto City in the neighbouring Toyama Prefecture, in a rented car.

You can rent a car in Japan online, but it can be a bit tricky for non-Japanese speakers. I needed to ring directly to the branch as my membership card did not work online. You may need help from staff at an information centre, often located in major railway stations. Basic fees for renting a car are reasonable, but on top of that you need to pay for various levels of insurance. We rented a Nissan March with all the frills including GPS navigation, and it cost ￥25,000 for three days minus two hours. After 280 kilometers we filled the tank and returned to the shop.

Once you leave the city centre, driving is easy. The road rules are basically the

same as in New Zealand. Motorways away from major cities are fairly free flowing. In less than an hour, we arrived at the business hotel in the central area in Nanto City.