Taiko – Autumn festival in my hometown 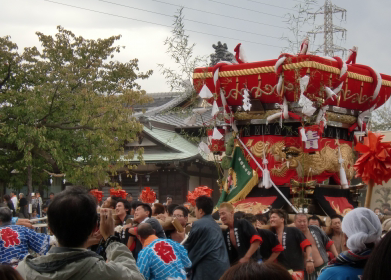 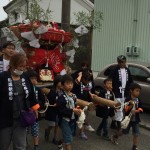 celebrating the rice harvest. When you visit Japan in October, you may come across a number of festivals all over the country. 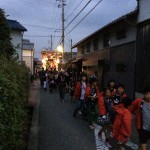 Taiko is the generic term meaning drums, but in our area it is also used to call the float you drag and carry around town for the festival. My neighbourhood used to be a farming village and some of my playmates came from farming families. One of them even had a bull for cultivating their rice fields. We managed to retain our Taiko though our neighbourhood now consists of wage earners commuting to big towns, while most of nearby villages lost theirs due to urbanization. 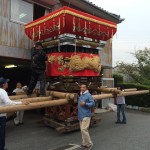 The photos show how they pull out Taiko, the float from the shed and 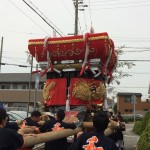 decorate it. It cost one million yen some years ago to repair the wooden structure and renew some of the embroidered covers. Our cover features crabs, coming from the original name of the village. In the afternoon they start to roam around town, chanting as they go, and kids enjoy helping to pull the float with a kid drumming the big drum inside. At night the lights are on and more teenagers and young adults join. It makes me nostalgic to see the lit up float pass in front of our house, with the low, slow drumming sound. 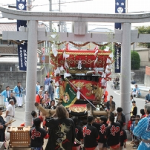 The next day is the main event. Around lunch time they take the float to

the shrine, carrying it around the grounds before lifting it as high as they can as a ritual to the gods. The float weighs more than a ton. Over the years it has become more and more challenging as there are less muscled men and more white-colour workers.  The drumming is frantic and exciting. After the relief of witnessing the safe rounds, families enjoy their special lunch together. 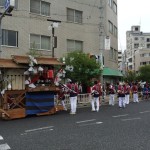 Back from the edge of extinction, Taiko is now alive and well, supported by local residents who are no longer farmers. I came across another one in town near the Shinkansen station, with many kids pulling and in 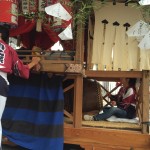