Travel Japan No. 4 Escape to the country – Nanto City

Seeing only Tokyo when you visit Japan is like seeing only Auckland CBD when you visit New Zealand. The essence of Japan lies in the countryside. Rural towns in Japan are not only abundant in natural beauty but also in history and culture.

This time I chose Nanto City, which I had never been to, now that the access is so much better. Was it a good choice? YES! I would strongly recommend it to anyone.

Nanto City is the southernmost town in Toyama Prefecture, and is next to Kanazawa, the capital of Ishikawa Prefecture. It takes about 50 minutes to get there from central Kanazawa by car. Its population is around 50,000.

I chose the business hotel because it is central to neighbouring areas, but it 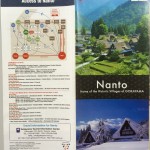 turned out that there aren’t many shops around it. We struggled to find an eatery at night and ended up buying packed delicatessen foods at a supermarket. We also found that there was no fridge in the room. It was a mistake to assume there would be one. We had brought our own cereal, but my soymilk bought at a convenience store curdled the next day. We carried plastic bowls and spoons, but the Japanese teacups they provide are too small for a decent filtered coffee. Next time I return to Japan, I will take plastic mugs too.

Tip: You can depend on supermarkets and convenience stores in rural Japan when there are not many options of meals.

We left the hotel in the morning and drove along a river to Gokayama, a world heritage site in the mountains. The roads wind along the side of cliffs, but the scenery is breathtaking. We stopped on the way and took many photos. There is a ferry service on Shogawa river to a hot spring, but we skipped that this time.